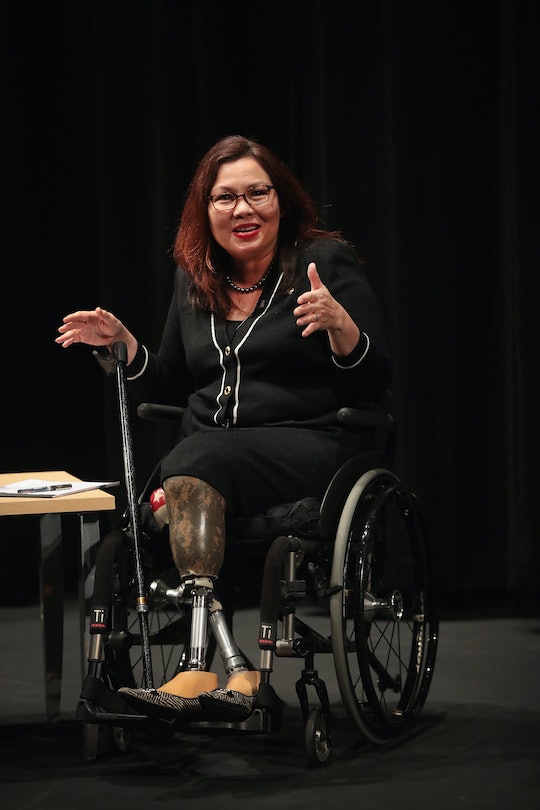 Today officially marked a historic first in American politics when Illinois Sen. Tammy Duckworth gave birth to a baby girl on April 9. Of course, women have children every day, but this working mom has broken a glass ceiling by becoming the first sitting member of the Senate to give birth. She's long been an advocate for working parents and her pregnancy with her second child made that all the more clear. Indeed, Duckworth’s quotes about motherhood and being a working parent prove she’s not giving up even a day in her fight for equality and fair opportunities.

"Bryan, Abigail and I couldn’t be happier to welcome little Maile Pearl as the newest addition to our family," Duckworth wrote in a tweet on Monday announcing her exciting news. When the senator welcomed her first baby in 2014, another daughter named Abigail, she took 12 weeks of maternity leave at her home in Illinois, according to CNN. This time around, she’s still taking leave — 12 weeks again, according to Politico — but will be staying in Washington, D.C. to be available for Senate votes.

That kind of focus shouldn’t surprise anyone who knows Duckworth’s story. She was a helicopter pilot in the U.S. Army and became the first female double amputee of the Iraq War, losing both her legs in a crash, according to The Star. A year after she sustained her injuries, she told Stars and Stripes, “This didn’t change who I am. I’m an air assault pilot. I’m not about to let some guy who got lucky with an RPG decide how to live my life.”

If anything can test that indomitable spirit, it's motherhood. But, for now, Duckworth is keeping a global perspective on her latest life change and her quotes on motherhood prove she'll never stop fighting for equality for all parents.

As one of only 22 women in the Senate, Duckworth is in a unique position. When she released a statement about her most recent pregnancy, she took the opportunity to remind everyone that lots of parents, both men and women, are out there getting things done every day. “Parenthood isn’t just a women’s issue,” Duckworth said in a statement on Monday, according to NBC News. “It’s an economic issue and one that affects all parents – men and women alike."

On Loving Her Work

Some moms want to keep working or return to the workforce because of economic issues. And for some women, it is the love of the job and the work they do. Duckworth seems to feel that way about public service, with 23 years under her belt as a member of the National Guard and now two successful campaigns. “As tough as it’s been to juggle motherhood and the demands of being in the House and now the Senate, it’s made me more committed to doing this job standing up for hardworking families everywhere,” she said in a statement, according the Chicago Sun-Times.

On Her Journey To Grow Her Family

Like many families, when Duckworth and her husband were ready to have children they found they had trouble getting pregnant. The Chicago Sun-Times reported that the couple tried a variety of methods before her first daughter was conceived through in-vitro fertilization. After her daughter’s birth, she suffered a miscarriage before getting pregnant with her new daughter, according to the Chicago Sun-Times.

The same tenacity that got her through fertility treatment fuels her everyday at work in her fight for women. "It was a struggle to get pregnant. It is a struggle to be a working mom and to try to deal with all of these issues," Duckworth told NBC News. "It was a very long journey for us to get to the point where we can have a second child and we're just very very blessed that we can do it. But yet there are millions of women all across this country who continue to struggle."

Duckworth used her pregnancy announcement as a springboard to discuss the issue of maternity leave and bills being introduced to provide more support for families. She reminded readers in a statement, “The United States is one of two countries in the world that doesn’t offer paid maternity leave and one of the few industrialized nations that doesn’t offer paid parental or family leave."

Even Duckworth herself can't technically take maternity leave, she told Politico's "Women Rule" podcast, because then she wouldn't be allowed to introduce legislation or vote on bills. She said she's working with her party's leadership to determine how she can still be involved in important legislation while caring for her newborn. "It's going to change some Senate rules," Duckworth said, according to Politico.

On Better Facilities For Breastfeeding

Duckworth used her own experience as a working mom as inspiration for a bill that would provide friendlier spaces in airports for nursing moms. In a 2017 op-ed for Cosmopolitan, the senator told of her own discomfort while trying to nurse or pump while maintaining her busy flight schedule back and forth to Congress. She wrote:

As a nursing mother, I had to stick to a feeding and expressing schedule, including when I was at the airport, but I quickly realized that finding a clean, accessible, private space was stressful and inordinately difficult. While I was comfortable breastfeeding my daughter in public, I did not want to express next to strangers using the same outlets to recharge their electronic devices. At many airports, I was redirected to a bathroom, forced to pump in a bathroom stall.

She drew on that while reintroducing legislation that would free up some airport funds to be used for constructing better nursing facilities for moms.

Congratulations go out to the entire Duckworth family! It's great news that, today, there’s one more little fighting Duckworth in the world.