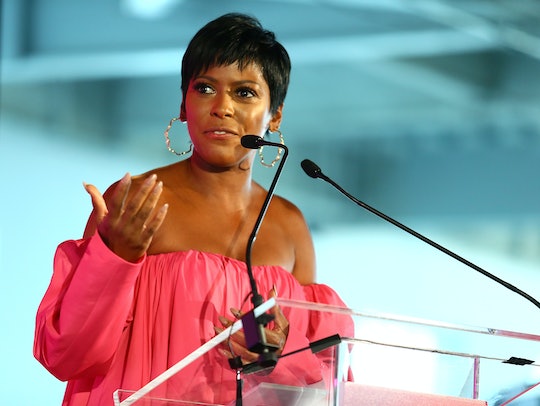 A longtime fan favorite and former TODAY host shared an exciting update with the world on Monday. That's right, Tamron Hall revealed she's pregnant with her first child — and she's married! The 48-year-old made the shocking dual announcement on social media in the most adorable way — utilizing the viral song "Baby Shark" to ensure you don't forget anytime soon.

In her post, Hall appeared wearing a white gown, holding a book with "Baby Shark" written across the top in front of her burgeoning belly. "Surprise, guys! Can you believe it? I'm about to be a mommy shark very soon," she says in the sweet video.

Hall also said in the brief clip that she's currently 32 weeks along in her pregnancy, which mean she has roughly two months left in her pregnancy. And that's not the only news she delivered in her Instagram announcement. The former TODAY host surprised fans by revealing that she's married to a man named Steven. Hall didn't share any more information about her hubby, but said in a separate Instagram post she shared that both she and the father-to-be "are beyond excited!"

"I've wanted to share this news for many months and now finally my doctor has said I am in a safe place, at 32 weeks, to share my joy with y'all," she wrote on Instagram on Monday. "There have been many tears, but today I embrace the smiles. My husband Steven and I are beyond excited! We're in constant prayer, so if you pray, add us to your list; if you meditate, send calmness our way; and if you believe in luck, we'll happily take that too."

If you thought that was all the exciting news Hall had for fans, think again. Hall also announced on Instagram on Monday that her nationally syndicated daytime talk show, Tamron Hall, will premiere Sept. 9.

"When one door closes... (say it with me) another one opens! @disney just announced that my nationally syndicated daytime talk show 'Tamron Hall' will premiere on 9-9-19! I am also proud to share that I will serve as an Executive Producer on our new show, alongside legendary producer Bill Geddie!" she wrote in an Instagram post.

Hall announced her exit from TODAY in February 2017, after NBC canceled the time slot she shared with Al Roker to "make room for a new program led by former Fox News host Megyn Kelly," according to CNN.

"Yesterday was her last day as an anchor on both networks," the statement said "Tamron is an exceptional journalist, we valued and enjoyed her work at 'Today' and MSNBC and hoped she would decide to stay. We are disappointed that she has chosen to leave, but we wish her all the best."

In her own statement, according to E! News, released through NBC, Hall said, "The last ten years have been beyond anything I could have imagined, and I'm grateful. I'm also very excited about the next chapter. To all my great colleagues, I will miss you and I will be rooting for you."

Deadline was among the first outlets to share the news that Hall was getting her own show back in 2018, revealing that the syndicated talk show would appear on ABC-owned television networks.

So many congratulations are definitely in order! Keep your eyes on Hall's social media pages for updates about her journeys in both motherhood and TV.