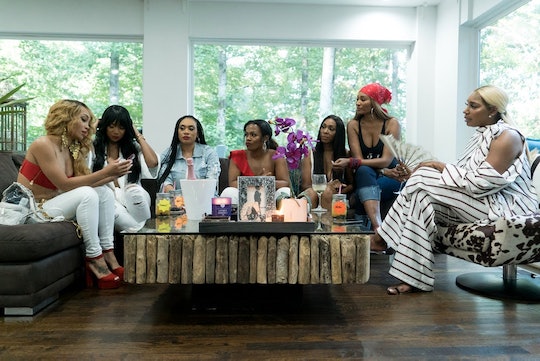 The Real Housewives of Atlanta continues to top itself with babies, empty nesters, burlesque shows, and new music. With the latest introduction of NeNe Leakes's friend, Tanya Sam, the internet set itself on fire trying to get to know the new addition — especially since she arrived at Cynthia Bailey’s in a black Rolls Royce. I mean, hello — what an entrance. The BFFs met at NeNe's store, Swaggalicious, but that's all superficial info. You want the crux of it, so the real question is, who is Tanya Sam? Well, Tanya has some serious credentials.

According to Bravo, Tanya is the director of partnerships at TechSquare Labs but holds the former title of nurse in oncology and hematology (for 10 years!) at Northside Hospital. She also holds the titles of Co-Founder and Vice President of Limitless Smart Shot, an energy shot. Oh, and she also co-founded BuiltxWomen and leads Ascend 2020. That's quite an impressive resume. Her style and love for labels may mean she makes a (visual) splash in Season of 11 of the Real Housewives franchise. She recently told The Lookbook, “I think my style is a little bit of everything." She added that wearing scrubs in her previous life made her want to rebel in every way fashionably possible and I'm here for it. From designer purses to top line labels, Tanya and NeNe have bonded over the fact that they share a birthday and — what else? — clothes! She said of her friend NeNe, she's "great at making recommendations and she’ll send you stuff, like she’s really very generous in terms of like the stuff that she has in her store."

In terms of her love life, Tanya's man — whom she's been engaged to for three years — is Dr. Paul Judge, founder of the Anti-Spam Research Group, avid investor, and technologist whose expertise for the Federal Trade Commission in the 2005 Report to Congress on the Effectiveness of the CAN-SPAM Act was crucial. Talk about amazing. She told Page Six, "[He] went to Morehouse, got a Ph.D. from Georgia Tech — so he is like the quintessential tech genius geek." The two sound like they're made for each other.

In an interview with AJC, Tanya explained why she wanted to join the show, saying she's lived in Atlanta a long time and "wears many hats," adding, "When I was asked to join and get to know the ladies, I thought of the viewers it touches. I wanted to showcase and show off different paths of success via technology." She went on to add how enthusiastic fans are to see a different kind of energy, which she brings.

The Toronto native has a degree in genetics and cell biology from McGill University in Montreal and yes, I'm impressed. Her studies of the human genome, she said, made her feel a bit isolated so she snagged another degree in nursing from the University of Toronto. I mean, of course she did. Now that she'll be on RHOA, I'm sure you'll see even more sides of her.

As far as what fans think of her on the show, she said she doesn't worry about that. "What really matters to me is what my partner, what Paul thinks, his reaction." Ugh, so cute.

Only time will tell as to how Tanya's overall presence is received (as more than a friend to the main cast members) but considering all she's pursuing and all she's achieved, I think this season of RHOA will be the best one yet — and the most fashionable.