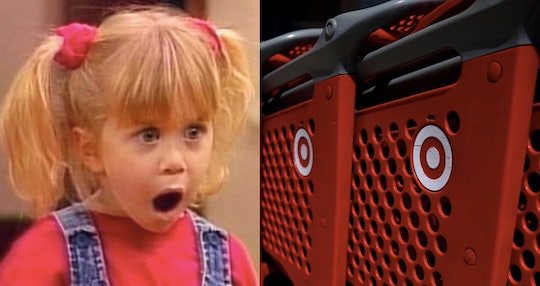 Target Is Lowering Its Prices, & Get Ready To Go Broke

You know the joke: You go to Target for a few items and end up with a bill that's more than $200. I know that's been my experience every single time I step in and out of that store. I walk in to get diapers and I leave with new shoes, workout gear I didn't need, home decor items that make no sense, and the feeling of defeat that comes with a depleted bank account. But, in what seems to be a blessing from the deities of bargain shopping, Target is lowering its prices. In the words of Fry from Futurama: Shut up and take my money.

According to BuzzFeed, Target has announced plans to cut prices on thousands (yes, thousands) of everyday items, including but not limited to baby formula, cereal, paper towels, razors, and toilet paper. Milk, eggs, crayons, and markers also seem to be on that list.

What's more: The discount big-box retailer is also doing away with more than two-thirds of its price and offer call-outs (you know, those "Weekly Wow!" or "Bonus Offer" signs and ads). This way, shoppers "can more easily spot the savings" during their Target runs, the company wrote in a blog post earlier this month.

According to Target's blog, Mark Tritton, the retailer's executive vice president and chief merchandising officer, said of the price cut and subsequent changes:

We want our guests to feel a sense of satisfaction every time they shop at Target. Part of that is removing the guesswork to ensure they feel confident they’re getting a great, low price every day. We’ve spent months looking at our entire assortment, with a focus on offering the right price every day and simplifying our marketing to make great, low prices easy to spot, all while maintaining sales we know are meaningful to guests. And guests are taking note, appreciating much easier, more clear — and more consistent savings — at Target.

But Target's pricing update doesn't mean it is getting rid of promotions all together, the company noted. Instead, the changes are meant to "cut through the clutter" so that Target can provide customers with "only our best, most compelling sales" on "the right products at the rights times," according to its blog post.

It's not clear, though, when the price cuts will begin. Target's blog post, dated Sept. 8, doesn't indicate a roll-out date. A Target spokesperson told Romper that the company started to lower its prices throughout the spring and summer.

This is not the only good news to come out of Target as of late. On Monday, news broke that the big-box chain will raise its minimum wage to $15 an hour. According to The Washington Post, Target will first increase its hourly wage to $11 by next month, and promises to up the rate to $15 an hour by 2020.

In many ways, Target's decision to up its hourly pay to $15 is monumental. Since the launch of the Fight for $15 movement in 2012, hourly workers have fought for a livable wage. Right now, the federal minimum wage remains static at $7.25 an hour, which is an insult to employees — in particular, those people struggling to survive in expensive cities such as my hometown of Brooklyn. As CNBC op-ed noted, Target's move to increase its pay puts pressure on competitors like Amazon and Walmart, as well as fast-food joints like McDonalds, to follow suit.

In other words: Now you have less reason to feel guilty walking out of Target with such a high bill. I mean, you're going to support a chain paying its workers a fair wage, all while spending less on more stuff (you didn't need). And if you're this pregnant shopper, you may also walk out with a newborn.