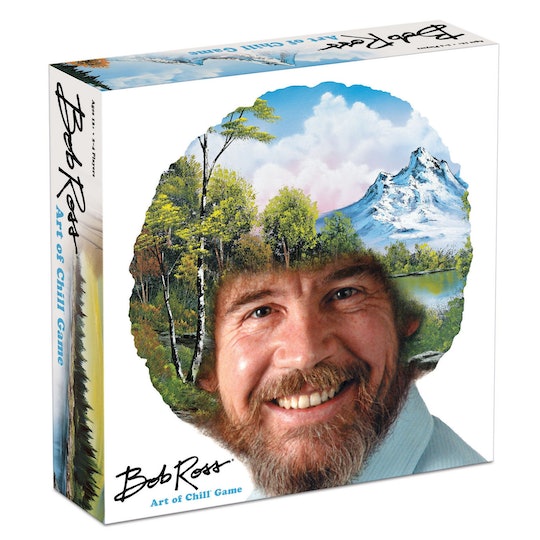 Target Now Sells A Bob Ross Board Game, & It Is So ~Chill~

If you're ready for the ultimate throwback, get ready to head off on a shopping trip, because Target now sells a Bob Ross board game, and you're definitely going to want it in your life for some nostalgic hilarity. The board game is called Bob Ross: The Art of Chill, and it lets players earn "chill points" by painting landscape features with the colors you're dealt. It's competitive (in a chill way, of course), there is actual painting involved, and — bonus — the board game's cover is good enough to be used as art in your home.

According to Target, the chill game is meant to be played by two to four chill people whose objective in the game is for each player to chill and race to complete one of Ross' masterpieces before Ross himself does (in the board game of course), winning chill points if you finish before Ross does.

The game comes complete with plastic figurines, four palettes, 60 art supplies cards, 24 chill cards, 11 technique cards, 12 feature markers, four chill cubes, one "Bob mover," 15 double-sided paintings, an easel, and a die. And while I think I understand the basic goal of this game (beat Bob Ross to earn chill points and live eternally victorious), it sounds like there are enough moving pieces happening in this game to keep things interesting (and chill, of course). The game says it's for players aged 12 and up.

Bob Ross: The Art of Chill Board Game, $25, Target

The reviews have already started stacking up on the board game, and it sounds like people have been pleasantly surprised by the game, with one reviewer writing:

I was really surprised at this game. I thought it would be just a puff piece, but it actually had a lot of layers and I can see a lot of re-playability. Good family game night board game, and our 9 year old was able to pick it up quickly.

Now, I didn't grow up with Ross in my life myself (here's a shoutout to my parents, who were solidly in the "TV rots your brains" camp), but university friends introduced me to the late artistic legend, whom they talked about with almost cult-like appreciation. So I wasn't all that surprised to discover that Ross fans have been quick to pick up Target's board game and share their reactions to it online. Many have either already purchased (and loved) it, or they're adamant about getting their hands on the game ASAP:

To make the deal even sweeter, the board game can also reportedly be bought in a Target set that includes a Bob Ross figure. I haven't found it online, but it looks like it's a real thing in stores, judging by reports on social media. (If you're more into just displaying a Ross vinyl figure than playing the board game, the figure can also be found online on Amazon for $14.85.)

If you're dying to get Target's new Bob Ross board game in your life — or you know someone who needs the game as a birthday present — call your local Target to see if they have it in stock. It looks like it's only available in stores at the moment, so you'll have to go pick it up in person (you know, the old-school way, as Ross just might approve of).

The game retails for $25 and should bring a maximum dose of creativity, nostalgia, and — of course — chill into your life. And while you're at Target picking up the game, take a look around: the store also has some pretty sweet Bob Ross T-shirts, DVDs, and calendars for you to take home, as well.