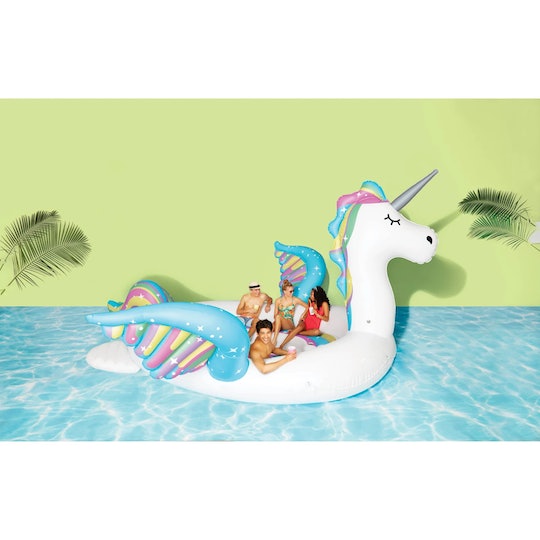 Hi Hello, This Giant Unicorn Float Is Basically A Party Pad For The Lake

Even though it's still cold and rainy where I live in the northeast, I am already planning for the long, warm days of summer. It is almost as if making these plans wards off the chilly moist air that permeates the skin as soon as one ventures outside. I've spent long hours browsing the aisles of my favorite stores, finding the best new goodies for all my summer celebrations. So far, my favorite stuff is at Target. It's no surprise, Target being my home away from home and all, but Target's giant unicorn lake float is ridiculously fun, and I think it's going to be a must-have item this summer.

This year, Target rolled out a line of products, all under its new "Sun Squad" label, that start at just $2. They are out-of-control stupid great. They have everything from margarita pitchers to lawn chairs and tee shirts for your dog. But this float for the lake or your pool is just one of dozens in the line that are ready to let you drift lazily as you sip your soda and work on your vitamin D. This bad boy holds up to 500 pounds, so several of your friends can float on it at once.

Yes, at $250, it's a spendy float, but it's massive. It's 207 inches long by 205 inches wide by 107 inches high. That's more than half of my Brooklyn apartment, I am pretty sure. I'm not saying that if I blew it up in my living room that its head would bust through the window and make my neighbors wonder what sort of weird live action role playing game I recently discovered, but I am not saying they wouldn't. Perhaps I should really freak out my neighbors and add the pirate skull floatie to the mix. Go big or go home.

Granted, you need to be very close friends or related to whomever you decide to join to sit upon Target's giant unicorn lake float, because you know that all of you are going to be covered in an uncomfortable sheen of sweat, making lots of inappropriate sounds as you squelch around on the float, trying to get situated. This is not an activity for new friends. This is an activity for siblings or long term besties, or partners who have seen each other go to the bathroom because their children keep opening the door anyways, and the mystery is gone.

I have huge plans for this summer, and several of them revolve around laying in a pool float, completely covered in a layer of zinc oxide heavy enough to make people wonder why the Stay Puft Marshmallow Man has decided to retire from menacing New York City and instead taken up residence in a New Jersey pool. There will be sun hats and cheap beer and watching my children fight over who gets the last otter pop. It's going to be the stuff of summer dreams, and I can get every last item I need at my local Target.

A great woman I don't know was once quoted as saying "I don't go to Target with a list of things I want, I go to Target and it tells me what I need." Well, friends, I dare say that I need a $250 giant unicorn lake float to make my life complete, or at least make my summer just a little bit more joyful. I might even buy my children their own floats, because I'm magnanimous like that. Who am I kidding, as soon as my kids see Target's giant unicorn lake float, I will never see it again.