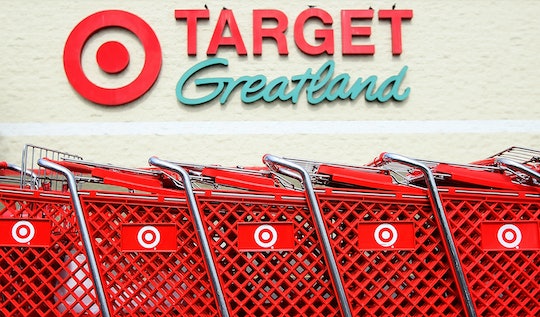 The Wait Is Almost Over: Target's New Loyalty Program Is Launching Next Month

There's no denying that people love Target. From Target themed baby showers to photo shoots in the aisles, shoppers have long showcased their obsession all over social media. And now, the home of the beautiful bullseye is showing some more love back to its shoppers, and their communities with Target's loyalty program that allows shoppers to save money with a personalized shopping experience, as well as have a say in where the franchise directs its giving initiative.

The loyalty program, called Target Circle, will launch nationwide on Oct. 6. This free, easy-to-use program offers a variety of benefits including 1 percent of every purchase back to redeem later, personalized deals and perks — including a birthday surprise — and early access to special sales throughout the year, Target shared in a press release on Monday.

“Our guests are at the center of everything we do, and we’re always looking for ways to create even easier, more rewarding shopping experiences that give them another reason to choose Target,” Rick Gomez, executive vice president and chief marketing and digital officer at Target, said. “We worked directly with guests to develop Target Circle, and the program includes the benefits and perks they told us were most important to them, from earning on every trip to having the opportunity to help Target make a positive impact in their local communities.”

Target Circle was designed with the popular Target RedCard in mind, aiming to provide perks and discounts to all shoppers — including those who are not interested in opening a credit or debit card, as USA Today reported. If you already use Target.com, Cartwheel, or Target RedCard, you will automatically be enrolled in Target Circle. If you are a Target shopping newbie, simply sign up by creating a Target.com account, applying for and using a RedCard, or provide your phone number in your local Target store, according to Delish.

Along with Target shopping benefits, Target Circle also allows patrons to participate in the company's charitable efforts, Business Insider reported. Members will be able to cast votes through the program in favor of which nonprofit organization the Target will contribute to support. Thus far, Target Circle has been tested in Dallas-Ft. Worth, Charlotte, Denver, Indianapolis, Kansas City, and Phoenix over the course of 18 months.

Responses to the program have been positive and the company reported that Target Circle members have saved, and spent, more money than guests who are not enrolled in the program, according to the press release. In the test areas alone, more than 2 million guests have enrolled in Target Circle and completed more than 14 million transactions. Additionally, those members have cast their votes to donate more than half a million dollars to local nonprofit organizations.

With the program going nationwide, the savings and spending are set to continue to rise. There are just a few short weeks between the many Target devotees of America and an exciting new way to shop and save. I don't know about you, but that's just about the best news I've gotten in a long time.