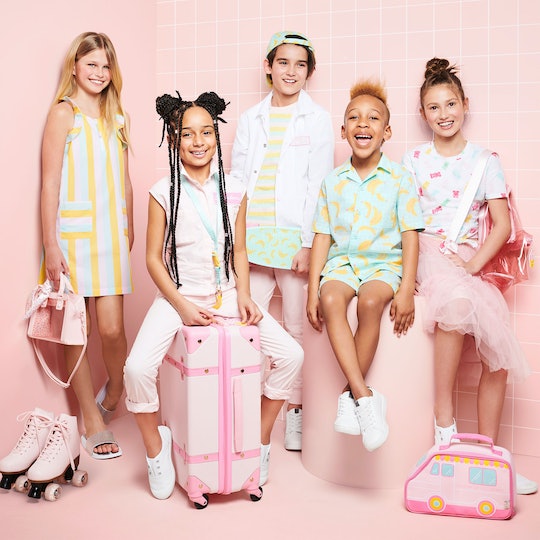 One of your favorite stores is adding another super sweet way to dress kids fashionably without breaking the bank... and parents are going to be just as obsessed. Target's new kids clothing line is inspired by The Museum of Ice Cream, the California-based interactive museum that all of your favorite celebs love.

People reported on Tuesday that the brand has announced its new Art Class Kids' Collection, and it is already available for preview online. The new products in the line will include shirts, pants, shorts, jumpsuits, skirts, sweaters, dresses, swimwear and more. The pieces will retail for $6-$60, with most averaging under $25. The collection officially launches on June 3 in stores and at Target.com.

The Wall Street Journal reported Tuesday that The Museum of Ice Cream is also releasing its own line of pint-sized ice cream flavors such as Cherrylicious, Churro Churro, Nana Banana, Chocolate Crush, Vanillionaire, Piñata, and Sprinkle Pool, all of which were also inspired by the museum itself. Lo and behold: one of the first retailers to carry the products will be Target. The flavors will be available in stores starting July 8 through the end of the year, and will be priced at $4.99 per pint.

The motifs in the clothing line were taken from The Museum of Ice Cream's iconic styling. The pieces feature distinctly summery vibes, tons of pastels (particularly pink), and images of sprinkles, gummy bears, cherries, bananas, and other classic ice cream toppings.

For those who don't know, The Museum of Ice Cream opened first in Manhattan in 2016, and then in L.A., where it has remained. It's an interactive art installation created by Manish Vora, CEO of digital storytelling space Lightbox, and Maryellis Bunn, former head of innovation at Time Inc., according to The Hollywood Reporter. The museum features everything from an ice cream sandwich swing set to a sprinkle pool, and each admission ticket comes with two scoops of ice cream. The founders told The Hollywood Reporter that they developed the idea with social media in mind. Vora shared:

Our view is that everything from your restaurant experience to your retail experience is being changed by Instagram and Snapchat... also the actual social human component, which is why it's a high-touch experience.

The museum has been a favorite of celebs like Kim Kardashian and Beyoncé, both of whom took their children there. Bey even did it for Mother's Day, which is extra sweet, and Kim reportedly laughed when she saw the "Kim Karbstashian" star on the floor.

As for whether or not celebs will find the museum-inspired clothing like just as delicious, well... it's too early to say, but it seems likely. At least, that's certainly the store's intent. Executive Vice President and Chief Merchandising Officer at Target Mark Tritton shared in one of the company's press releases:

We want guests to experience a true sense of joy when they’re shopping at Target, and one way we do this is through partnerships we think they’ll love. When our team visited the first Museum of Ice Cream in New York City, they instantly knew it was something special. Between our shared values of joy, creativity, focus on design and unique experiences, this partnership allows us to give guests a taste of Museum of Ice Cream’s signature aesthetic, right at their local Target store and on Target.com this summer.

Co-founder Maryellis Bunn was also quoted in the release, saying: "It was a dream to team up with Target to bring the vision of Museum of Ice Cream nationwide and beyond the walls of our spaces." It's a dream for them, and a dream for moms this summer, too.