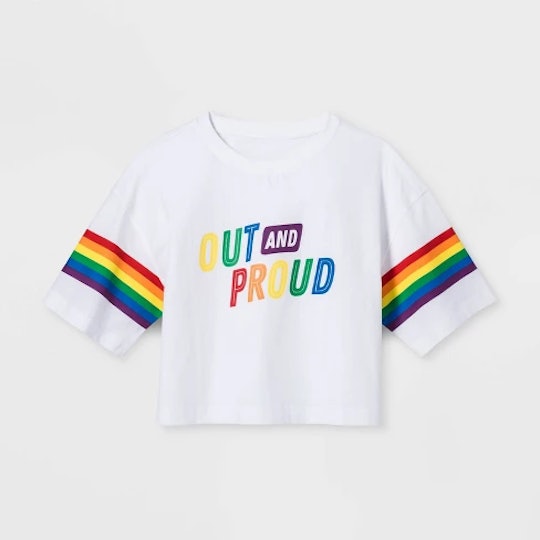 We are just days from Pride season and I am ready. But, I am also a mom, and I have a job, a kid in soccer, a very needy pair of cats, and an unhealthy obsession with romance novels, so I'm a bit behind on purchasing my merch. Thankfully, I can now buy some of the best Pride merchandise there is when I visit that queendom of all things good — Target. Target's new Pride line of goods has everything you could ask for in full rainbow glory, and it is conveniently located beside Goldfish crackers and self-tanner.

This year's line of Pride merch at Target is more dynamic than in year's past. Sure, it still has plenty of queer kitsch, like rainbow rompers and short rainbow swim shorts, but it has evolved. There are more kids' options than ever before, including cute tee shirts, rainbow fur trimmed hoodies, and their own stylish button ups. They're also chock-a-block in the accessories department, having dollar headbands and socks as well as shiny hats and rainbow themed clear backpacks, perfect for taking to the Pride parades, because you know that everyone is getting searched. It happens every year like clockwork.

A few weeks ago, I headed into a local Target after a long night of classes, and there before me, rising like a mirage from the desert of mid Manhattan hell, a fresh bloom of rainbow themed shirts, rompers, pool floaties, accessories, and even fanny packs. My mood, sour from many hours staring at data and computer screens, lifted. So much goodness in such a compact space. And, oh look, it's a sale on Dunkin' coffee beside it. They know me, those people at Target. I don't know if it's just the stores in New York City, but the Pride merch is front-and-center in the main aisle, and also scattered throughout the store.

My daughter is obsessed. For her birthday she just said, "I want all the Target rainbow stuff." My sister was immediately on it. She ordered her the rainbow fuzzy hoodie, and the cute rainbow drawstring bag, and my little girl hasn't taken it off since. It's actually becoming a bit of a nightmare, as it is cream colored, and it really needs washed. Thank heavens that Mother Nature must have agreed, because this week has been unseasonably warm, and that hoodie is now clean again. I was worried that it was going to start to stand up on its own. The bag has been incredibly useful in that my daughter has used it to carry her Babysitters' Club books and art materials, which she is never without.

When I was growing up, there was nothing like this. If you were queer, you had to make it yourself, or order it from some obscure website with sketchy graphics and links to weird, foreign eBay accounts. Don't get me wrong, I still had my fair share of Pride merch and bumper stickers, but seeing it, and buying it in a store as mainstream as it gets makes my heart burst with, well, Pride.

Target even sells bisexual, pansexual, and trans pride merch. I never dreamed of a day that major retailers would be shilling baby pink, white, and blue flags as a point of pride and value. What a time to be alive. Yes, we live in a precarious era, when the vice president thinks that queer people should be able to be denied access to basic healthcare if the provider is religiously homophobic, but this just shows how strong, how loud, and how proud the LGBTQIA+ community is, and that the community is not going away.