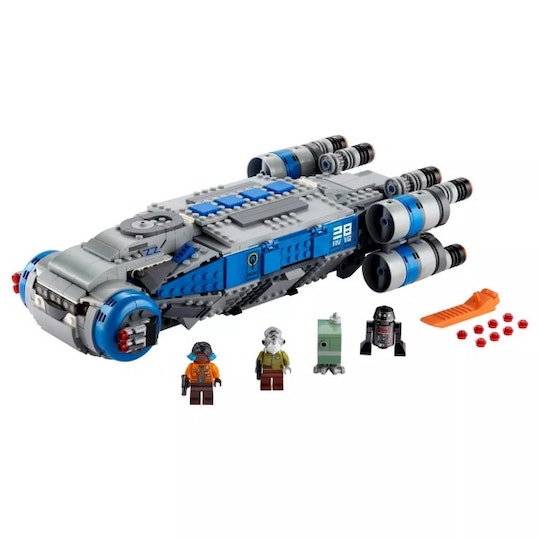 If you're anything like me, you've been missing Star Wars pretty hard. We're still months away from The Mandalorian, we know who Rey's parents are, and the Baby Yoda craze seems to have died down. That's why Target's exclusive new Star Wars: Galaxy's Edge collection is so dang delightful.

Inspired by Star Wars: Galaxy's Edge (the themed land at both Disneyland in California and Disney's Hollywood Studios in Florida), some of the toys in the collection were previously sold only at Disney — so it's exciting to see that they're finally available to people who can't get to one of the theme parks. Also including clothes, a cookbook and other books based on the series, pre-orders for the collection are already sold out. However, a Target rep tells Romper that restocking will happen on August 30, which is great, because I need my dang Millenium Falcon. I mean, I doubt the model version could make the Kessel run in less than 12 parsecs, but I have a great deal of imagination (you'd have to, since a parsec is actually a measurement of distance, not time). The model will set you back a cool $400, but I'm not sure how many creds that is. (Imperial or galactic?) Don't worry, though, because most of these toys are in the $9 to $25 range, with some at the $100 price point — of course the fastest ship in the galaxy would be a bit more spendy.

The droids are both adorable and more affordable. If you're a fan of the franchise, you know that while the droids may be machines, they are machines full of heart and personality. Whether you're thinking of the easily startled R2D2, or Rey and Poe's loyal and silly BB8, they bring light to even the heaviest of scenes. And though a droid of an entirely different sort, the valiant C3PO is one of the most beloved and esteemed characters in the entire series. The droid line at Target features BB8, but also some other cuties you might want to add to your collection.

If you're one of those types who loves to buy a villain toy (I'm looking at you, husband), then get excited, because for $25, you can have a Captain Cardinal figure to go with the Captain Phasma and Snoke figurines that you probably already have. You could even have them join up at the table for a proper cup of Bantha milk with the Darths. (I don't count Kylo as a fully bad guy thanks to all the self-sacrificing and whatnot. Not a great fella, but not terrible. However, if you're a villain collector, you're probably also one of those people who never take the toys out of the box to play with them, so there will be no milk and cookies.

That's OK, my droids will go for oil breaks. In the meantime, you can peruse all of Target's new exclusive Star Wars collection and their online exclusive activities for yourself and see if anything catches your fancy.