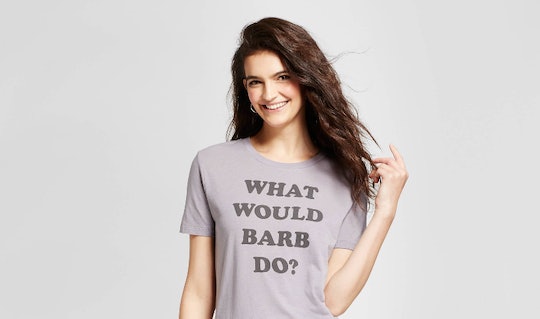 The wait for the second season of Stranger Things has been long for its fans, but it finally premiered early on Friday morning. And what's a TV series with the sort of massive popularity Stranger Things has without a couple of merchandise tie-in campaigns to help boost that popularity even more? Target's Stranger Things collection, for example, is a must have for anyone visiting from the Upside Down — or even just anyone who already binge-watched the entire second installment of the show and needs something else to feed their obsession. No judgment here.

By all accounts, the first season of Stranger Things was a huge hit. It earned 18 Emmy nominations and rave reviews, according to Variety. So it's no surprise that there was a lot of anticipation for the second season of the wildly popular Netflix series, or that retailers might have wanted to get in on the excitement. Sometimes merchandise for TV shows or movies can be kind of lame, and are clearly only done to turn a profit for everyone involved. But Target's Stranger Things collection has some legitimately cool stuff that fans of the show will definitely want to check out, before all the pieces fly off the shelves.

The entire Stranger Things collection at Target is now available, according to ComicBook, and it features everything from clothes, to games, to toys, and much more. It's kind of perfect timing, really — not only did the newest season of Stranger Things just come out, but the holiday shopping season is going to ramp up soon. Anyone looking to get a head start for a Stranger Things fan friend or family member can already get a ton of gift ideas, thanks to the Target collection.

The collection has already been out for a little while and the featured merchandise is doing well, according to Reed Hastings, the CEO of Netflix. Brands like Louis Vuitton and Topshop and Topman are getting in on the game too, according to The Hollywood Reporter. So fans at every "spending level" can find something that they not only like, but can afford.

But Target's collection is especially appealing, because it really seems like there's something for everyone.

One of the coolest Stranger Things-themed offerings from Target may be the "Collector’s Edition" of the first season. The set includes a Blu-ray Disc and a DVD, but the best part is, it comes in a VHS-style box. 1980's feels, anyone? Since that's when the series takes place, it was a really smart move on Netflix's marketing team to come up with the idea. Older fans, at least, will recognize what it's supposed to be (and by older fans, I mean me. Yes, I still own VHS tapes!).

There are also plenty of options in the Stranger Things collection at Target appropriate for your more fashion-focused fan friends. On Friday, there were 36 options in the "Clothing" category of the collection. I especially like the rather vintage-looking t-shirts, but there are also two options for an "Ugly Holiday Light-Up Sweater." They're both listed as being for Men — one in a big & tall option — but who cares? If fans who are women want one, I'm sure they'll be able to rock it.

There are also plenty of Stranger Things toys at Target, including a few board games. There's an "Eggo Card Game" that will appeal to any Eleven fan, plus a Stranger Things Ouija board and a themed Monopoly game.

In addition, there are several Funko POP! figures featuring all of the major Stranger Things characters. I definitely know a few people who love Funko figures, and they'll likely want to pick up at least one of the characters Target has to offer.

The Target collection also features soundtracks, lunch boxes, and more. Hilariously, there's even a "What About Barb?" subcategory, to honor a character a lot of fans felt deserved better than what the first season of Stranger Things did to her.

If you've already binge-watched the whole second season of Stranger Things, you've probably got some time on your hands to head over to Target or its website and check out the new collection there. And if you haven't seen it yet, you can stock up and throw a Stranger Things party, complete with games and costumes, thanks to Target. Even if that party is just you, watching alone, waiting anxiously to see what's become of Eleven and the gang.