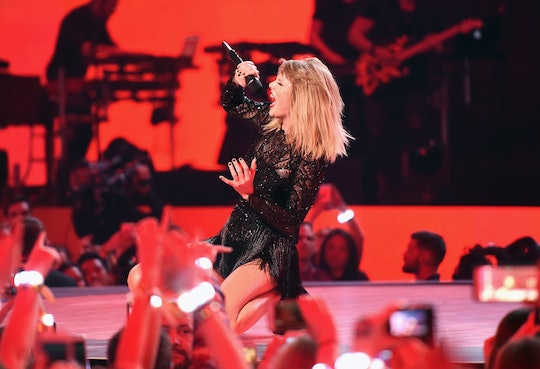 After premiering the video for the first single off of her new album last week at the MTV Video Music Awards, fans were happy enough with one new Taylor Swift single. Then, being as giving as she always is, Taylor Swift just released a new song called "Ready For It," during the Alabama and Florida State football game on Saturday night, totally surprising fans yet again. If things keep up at this pace, T-Swift could totally run out of songs before the album comes out in November.

Even more surprising is how different "Ready For It" is from "Look What You Made Me Do." Although both of the songs are totally pop and catchy, the first single was more of a statement song, centering around the theme of a "whole new Taylor."

This second single sounds more in line with the Taylor fans have already fallen in love with over the years. Although any true Swiftie counts on the fact that Taylor is versatile sometimes, too.e

Swift used an Instagram Story to direct fans to watch the game and catch the release of the song, but the drop really did take fans, at least on Twitter, by surprise. Who knew this was coming?

The song is still not available for download, but it's rumored to be hitting iHeart Radio on Sunday morning. The full Reputation album comes out in November, so the longest fans will have to wait is a few months. That's not too much ask, especially considering the fact that no one even knew a second single release was coming after the VMAs premiere of "Look What You Made Me Do" last week. Already, it's more than any Swiftie could have asked for.

Over the weekend, most of the Taylor Swift news was centered around her attending one of her best friend's weddings as a bridesmaid. Abigail Johnson married photographer Matt Lucier at Old Whaling Church in Edgartown, Martha's Vineyeard, and Taylor was all about it. In a burgundy dress and matching lipstick on Saturday, one never would have known that she was getting ready to drop a single just hours later during the Alabama and Florida State game.

Since dropping "Look What You Made Me Do" last week, critics and fans have been going over the video and dissecting each and every word (and scene). Some were even questioning her "comeback" in the first place. For example, Kanye West wore a t-shirt this week that read, "She's beyond good and evil," in the same font Swift used in her "Look What You Made Me Do" video, which some people took as a sign that he was trolling her.

Either way, Swift has obviously already stuck her fans and haters in some way with the release of this new album. If anything, you have to respect the fact that she can still break the internet with a new single drop.