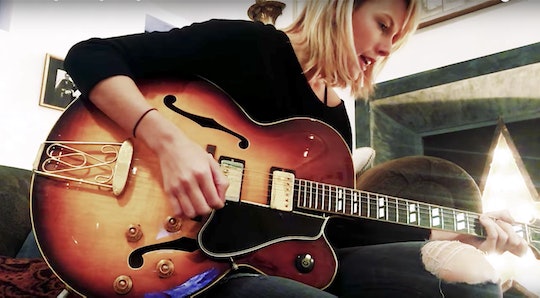 Taylor Swift May Have Just Revealed What "Gorgeous" Is Actually About

Ah, fall. Leaves begin to change, the temperature starts to drop, and one of the world's biggest pop stars reemerges. And now, Taylor Swift may have just revealed what "Gorgeous" is about, and it paints a whole new picture of her love life. Of course, Swift revealing the truth about her songs isn't really anything new, but the singer has remained relatively quiet about her new music lately. But, that might have just changed with a new behind-the-scenes video showing Swift's process while writing her latest hit, "Gorgeous."

Because, obviously, as soon as she released her latest single, internet sleuths and Swifties everywhere quickly pulled out their headphones and analyzed the heck out of every single line. And of course, hours after the song was released, articles began to appear suggesting what the song was about, despite Swift herself remaining quiet about the whole thing (for the most part, but we'll get to that later).

Specifically, the lyric in the song about Swift having a boyfriend at the time of meeting this gorgeous new guy had many thinking that the nine-time Grammy winner just admitted to cheating:

I got a boyfriend, he's older than us.

He's in the club doing I don't know what.

Because Swift's lyrics say that her boyfriend at the time was older than her — and whoever this new man was, but likely Alwyn — it seems to point to the fact that the "boyfriend" she's referring to was Calvin Harris, who is six years older than Swift and seven years older than Alwyn.

But, with Swift's new video of her working on the original lyrics of the song, some new information has come to light.

In the video, Swift is seen working on a couple of variations of the boyfriend line, including:

And I’ve got a boyfriend, he’s older than us/ I haven’t seen him in a couple of months/ I go through phases when it comes to love

And I’ve got a boyfriend, he’s older than us/ I haven’t seen him in a couple of months/ My reputation precedes both of us.

While neither of those lines made it to the final version of the song, the message they send is pretty clear: the boyfriend Swift is referring to wasn't exactly always there for her. And the notion that she hasn't seen him for so long basically rules out any theory that the boyfriend in question is Tom Hiddleston, since their romance lasted only three months, as Us Weekly reported. Which brings us back to Harris.

Harris is older than both Swift and Alwyn, and he's a DJ, meaning he spends a lot of times in clubs — just as the final lyrics suggest. More so, Swift and Harris dated for 15 months, according to People, which means it's extremely likely that they went a couple of months without seeing each other.

But, that doesn't mean it's any less sad. Swift's admission that she hadn't seen her boyfriend in so long — and that her "reputation precedes both of" them — is pretty heavy. It shows that, towards the end of their relationship, they weren't in a good place.

So, based on Swift's new behind-the-scenes video and what the general public knows about her relationships thus far, it seems as though "Gorgeous" really is about Swift falling for Alwyn while in the midst of an unhealthy or unfulfilling relationship. And that, in and of itself, is a pretty powerful message, and what Reputation seems to be all about. Swift is telling her story, and is doing so in her own way.

With "Gorgeous" and all of the pre-lyrics, it's clear that Swift's love life is something else that isn't so easily analyzed — and that's OK. It's Swift's life, and while her reputation might not represent who she really is, her music does. And with her latest single, it appears that Swift wants to show the world that meeting her current boyfriend put things into perspective about her previous relationships. Because life is just a classroom, and Swift is learning as she goes, just how gorgeous that classroom can be.

More Like This
28 Taylor Swift Lyrics To Caption Your Valentine’s Day Instagram Post
Sally Field Is The Ultimate Cool Mom Who Once Tried To Set Her Son Up With An Olympian
Marie Kondo Gives Up Tidying Post-Kids, Sparking Joy For Moms Everywhere
Keke Palmer Casually Drops Her Baby's Sex On Jimmy Fallon
What Parents Are Talking About — Delivered Straight To Your Inbox