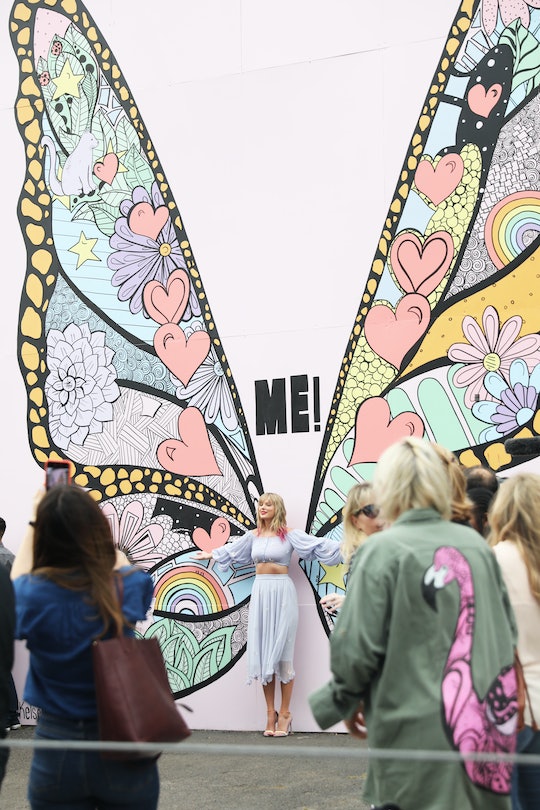 Taylor Swift "ME!" Memes Are Taking Over

On Apr. 26, Taylor Swift finally made a long-anticipated announcement by revealing a brand new single in collaboration with Brendon Urie from Panic! At the Disco. "ME!" is a colorful, bubblegum pop anthem celebrating individuality and the heavy symbolism in the video, among other things, generated tons of Taylor Swift "ME!" memes. There were also plenty of Easter eggs in the video, like a Christmas tree in the background of her apartment nodding to the fact that she grew up on a Christmas tree farm, a declined proposal (perhaps addressing recent engagement rumors), and a framed photo of the Dixie Chicks on the wall, prompting plenty of fans to wonder whether a Dixie Chicks collab was forthcoming on the new album.

But at its core, the video is all about transformation and metamorphosing. The opening sequence involves a snake — representing Swift's Kanye feud days — exploding into several pastel-tinted butterflies. And fans on Tumblr noticed that the entire video appears to take place inside a giant chrysalis, implying that a major transformation is ahead for Swift on #TS7, the unofficial name fans have bestowed on her next album and era. The whole video is quite literally doused in pastel rainbows and sparkles, with references to Mary Poppins, Singin' In the Rain, and Hairspray interwoven throughout.

Then, of course, there's the opening of her music video, which features a vignette scene with Urie in which the two play an arguing French couple, who actually fight in French! Her exasperated outburst of "Je suis calme!" was extremely relatable, and in my opinion, would spice up any IRL fight. Swifties are already working it into their comeback repertoires, if their tweets about it are any indication.

But there were also plenty of French-speakers dunking on Swift's accent which left a little something to be desired. Look, Cecily Strong she is not, but Swift does make a point to practice the native languages of the countries she tours, and she's tried out some French here and there when making appearances and doing interviews in France. At the 2013 NJR Awards in Cannes, she even performed part of the spoken word portion of "We Are Never Getting Back Together" en français.

The other predominant "ME!" meme genre plays on a portion of the music video in which Swift cheerfully declares, "Hey kids! Spelling is fun!" before informing them that you can spell neither "awesome" nor "team" without "me." Facts are facts.

The theme of reclaiming yourself seems to be a big one for this next phase of Swift's career. In an interview with Robin Roberts ahead of the video's release, she said:

‘ME!’ is a song about embracing your individuality and really celebrating it and owning it. I think that with a pop song, we have the ability to get a melody stuck in people’s heads, and I want it to be one that makes them feel better about themselves.

Although there isn't any word yet on when Swift's next album will drop, fans feel pretty confident that a clock in the music video set to 8:30 may imply an Aug. 30 release date. Fans will just have to wait and see.