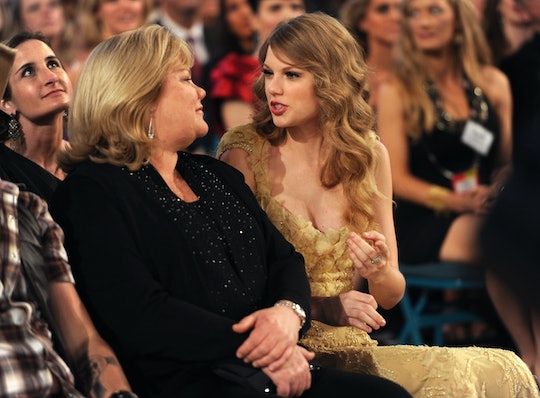 Though it's easy to forget at times, it's important to remember that the lives of celebrities aren't all glitz and glamour and, like the rest of us, suffer from real pains, losses, and heartbreaks. As a celebrity who has made a name for herself being open about her both her successes and difficulties in life, Taylor Swift revealed that her mom has been diagnosed with a brain tumor during an emotional interview with Variety. The two share a particularly strong bond and the heartbreaking news has had a strong impact on the singer's future plans both professionally and personally.

Speaking with Variety about her Sundance documentary Miss Americana, Swift opened up about her political views, creative process, family life, and more. During that interview, she touched on her touring plans for her new album Lover, explaining that she plans to limit herself to four stadium dates in the U.S. and a festival circuit tour in Europe — as opposed to the nine months out of the year that she usually spends touring following an album release. Along with wanting to perform in places that she hasn't in the past, Swift also hopes to stay close to home — and her mother, following her cancer diagnosis.

Swift shared that her mom Andrea's cancer returned during the filming of Miss Americana and she was undergoing chemotherapy when her doctors discovered a brain tumor. And while anyone would be distraught over their mother receiving such a diagnosis, the issue was a bit more complicated for Swift, whose mom doubles as her manager.

“Everyone loves their mom; everyone’s got an important mom. But for me, she’s really the guiding force," Swift told Variety. "Almost every decision I make, I talk to her about it first. So obviously it was a really big deal to ever speak about her illness ... she was going through chemo, and that’s a hard enough thing for a person to go through."

"While she was going through treatment, they found a brain tumor," Swift went on to share with the magazine. "And the symptoms of what a person goes through when they have a brain tumor is nothing like what we’ve ever been through with her cancer before. So it’s just been a really hard time for us as a family."

Swift first shared her mother's cancer diagnosis on Tumblr back in 2015. "For Christmas this year, I asked my mom that one of her gifts to me be her going to the doctor to get screened for any health issues, just to ease some worries of mine," she wrote. "She agreed, and went in to get checked. There were no red flags and she felt perfectly fine, but she did it just to get me and my brother off her case about it. The results came in, and I'm saddened to tell you that my mom has been diagnosed with cancer."

While Andrea successfully went through treatment, Swift announced in March of last year in her "30 Things I Learned Before Turning 30" essay that her mom had relapsed. "My mom is now fighting her battle with it again," she wrote at the time. "It's taught me that there are real problems and then there's everything else. My mom's cancer is a real problem. I used to be so anxious about daily ups and downs. I give all of my worry, stress, and prayers to real problems now."

It seems that Andrea's battle isn't over just yet, and Swift is once again focusing her prayers and energy on the things that matter and prioritizing family over the stresses of her professional life.