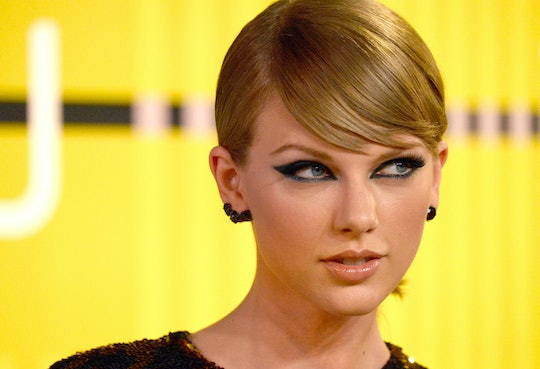 Taylor Swift Teases "Out of The Woods" Music Video On Twitter, & It's Looking... Muddy

She's looking fierce, and... muddy. Taylor Swift teased her "Out of the Woods" video on Twitter Wednesday evening, it's looking, well, primal. Scroll down and check out that determination in her eyes. And is that a slow crawl on all fours? Oh, T, bring it! Why are you covered in dirt? I want to know!

It seems in the video for "Out of the Woods," which officially drops some time on Dec. 31, New Year's Eve, during Dick Clark’s New Year’s Rockin’ Eve, Swift is out for more than bad blood. If this teaser image is any indication of the full music video to come, I can't wait to see how Taylor brings to life these lyrics: "Remember when we couldn't take the heat/I walked out, I said, I'm setting you free/But the monsters turned out to be just trees/When the sun came up/You were looking at me." I'm predicting you're going to see a tougher side of Swift in this video. Yes, even tougher than the TK-wielding warrior she played in the "Bad Blood" video.

The lyrics of "Out of the Woods" already bring the heat...

But when the sun came up/I was looking at you/Remember when we couldn't take the heat/I walked out, I said, I'm setting you free

and I have a feeling we're going to get a little more than a side eye in the latest video from the princess of pop.

The singer/songwriter is famous for using her love life as fodder for her material. It's thought that "Out of the Woods?" is about Swift and Harry Styles of One Direction. The two broke up in 2013. In the song she describes constantly wondering if she and her S.O. are on stable ground and if that's even a possibility. In an appearance on Good Morning America in 2014, Swift said the song is about "a relationship where I was kind of, living day to day, wondering where it was going, if it was going to go anywhere, if it was going to end the next day."

No word on what time the "Out of the Woods" video will drop, but Dick Clark’s New Year’s Rockin’ Eve airs at 8 p.m. on ABC. Until then, thanks for the teaser, Tay!