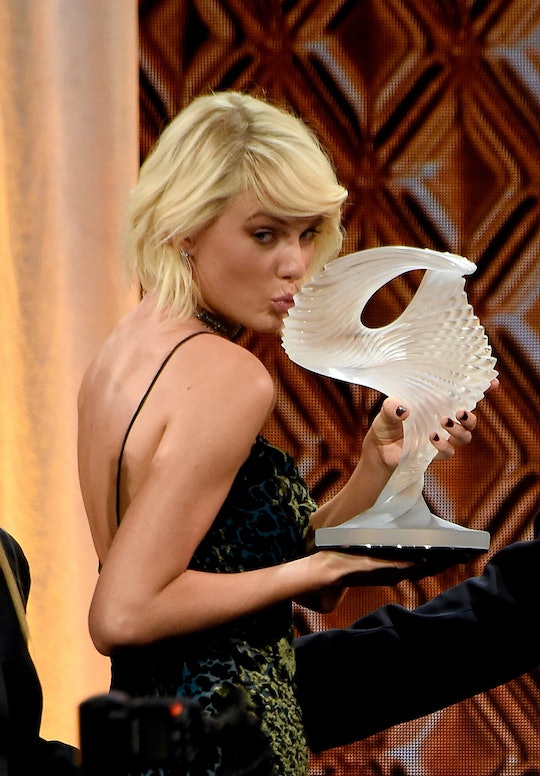 The queen of breakup songs just might be singing "we are never ever ever getting back together" to ex Calvin Harris, because Taylor Swift and Tom Hiddleston are reportedly dating. The Sun reportedly obtained photos of Swift and the Avengers actor kissing on a Rhode Island beach this week, just two weeks after Swift and Harris broke up. Neither Swift nor Hiddleston has confirmed the rumors, but the pics are pretty steamy.

Swift and Harris, a Scottish DJ, reportedly split in the beginning of June, after dating for almost a year and a half. At the time, Harris tweeted kind words about his new ex, E! News reported, telling followers that although the relationship had ended, "what remains is a huge amount of love and respect." Now, though, the Harris has deleted the tweet, a move that coincides with the public revelation that Swift is now mackin' on a new manpiece.

At the Met Gala in early May, the 26-year-old Swift and Hiddleston, 35, rocked a dance-off to T.I.'s "Bring 'Em Out." Fast forward about six weeks, and two are totally canoodling, as illustrated in the Sun photos, in which the pair is holding hands, smooching, and even taking selfies.

The photos were reportedly take Tuesday, June 14, on a rocky beach near Swift's mansion in Watch Hill, Rhode Island. According to The Sun, the duo certainly wasn't trying to hide on their romantic day out, as there may have been about 20 people in the vicinity.

Although the two met more than a month ago, reports indicate that neither Harris nor Swift cheated. So, it seems that the the singer and the actor have gotten pretty comfortable with each other in the past couple of weeks since her breakup, and the situation is blowing the internet's collective mind:

Although there's no evidence that Swift and Hiddleston had a secret relationship while she was still with Harris, the speculation will always be there, because she's super famous and talented and so is he. No matter if there relationship lasted for just that one afternoon, or of they get married and spend the rest of their lives together, this new beau will undoubtedly inspire material for her music. It's very likely that a Harris ballad will soon be in the works, and that's the good news about Taylor Swift's relationships for fans: She nearly always translates them into art for us to jam to in the car with our girlfriends.