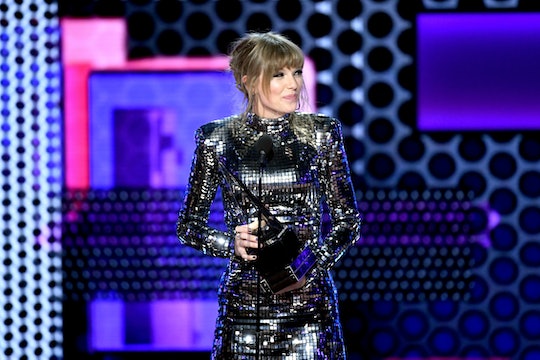 Even Though Her Endorsement Lost, Here's Why Taylor Swift's Political Statement Matters

The 2018 midterm election inspired so many celebrities to endorse candidates they believed in, including those who are typically uninvolved in politics. Taylor Swift, for instance, has famously never endorsed a candidate before this midterm election, when she endorsed Tennessee Senate hopeful and Democratic candidate, Phil Bredesen at the beginning of October. Unfortunately, Taylor Swift's endorsement lost, according to USA Today, but people can thank her for inspiring scores of young voters.

On Oct. 7, Swift took to Instagram and made her first public political endorsement ever, according to USA Today, telling her fans and followers that she was voting for Bredesen in the 2018 midterm election in Tennessee, where she is a registered voter. In the post, Swift spoke against Bredesen's Republican opponent, Marsha Blackburn, stating that although she supports women in office, she couldn't support Blackburn. "Her voting record in Congress appalls and terrifies me," Swift wrote.

Although the election wasn't super close, Swift certainly is not to blame for his loss — a huge success in this overall election can be attributed to her. The day after she posted her endorsement on Instagram, thousands of young people between the ages of 18 and 29 registered to vote, according to CNBC.

Less than 48 hours after Swift's post, over 169,000 people had registered online to vote, according to The Washington Post. In just two days, this number surpassed the total amount of voters who registered to vote in September on Vote.com. Because people registering to vote don't state why they're registering (or who inspired them to), it's hard to credit Swift alone, as The Washington Post noted.

But, given that 112 million people follow Swift on Instagram, it's safe to make the assumption that she had something to do with this. And this spike in registration is something that will have a long term impact — until these voters are forced to change their registration (due to address or name change, for example) they can continue to make a change in every election and have their voices heard. This way, candidates with platforms like Bredesen's can be elected in the future.

Bredesen thanked Swift on Twitter for her endorsement a few days after her Instagram post, according to CNN, addressing the singer directly. "When people like you who are in a position of influence speak out on issue, it's very important and I admire you for it very much," Bredesen said. "I know this is going to be very helpful to me and this race."

Although Blackburn still won, Swift's endorsement was helpful to the race, based on the people to register to vote alone. And her endorsement wasn't just about Bredesen; it was about inspiring others to vote for a candidate they believe in. Swift wrote on Instagram:

Please, please educate yourself on the candidates running in your state and vote based on who most closely represents your values. For a lot of us, we may never find a candidate or party with whom we agree on 100 percent on every issue, but we have to vote anyway.

Despite making such amazing progress for young voters everywhere, conservatives on Twitter mocked Swift on Tuesday night after Bredesen lost, according to USA Today. Some stated that she had "terrible taste in men" while others told her to stay out of politics.

But this is the last thing that people should be saying. Instead, they should be applauding her for helping inspire the youngest eligible voters to register to vote (for what might have been their first time voting). And when celebrities use their platforms for good, it has been proven that they have the power to make a change. When Oprah Winfrey endorsed Barack Obama for president in 2007 during the Democratic Primary, one study found that she influenced a reported 1 million votes in favor of Obama, according to Vanity Fair.

Although Bredesen might have lost, Swift's influence with young voters was a huge win — and this is just the beginning.