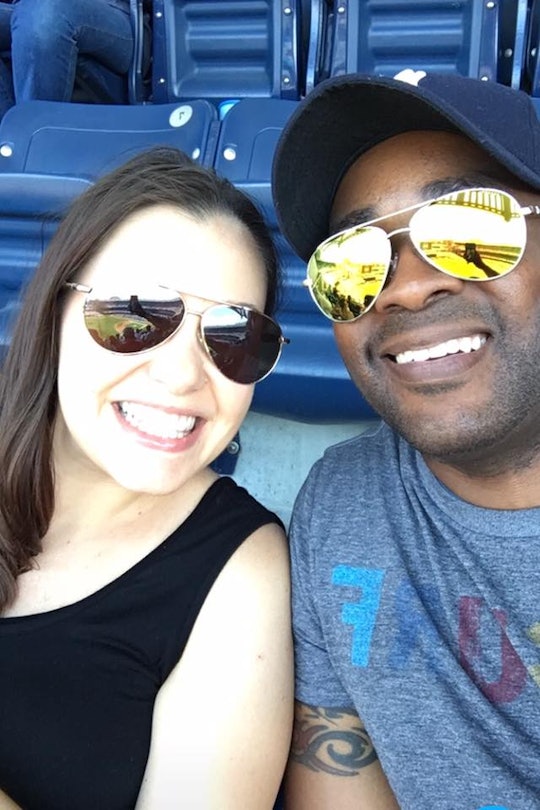 Marriage Is So Much Harder When You're Pregnant

I sat on the bed sobbing. I had a tissue balled up in my hands, and tears were running down my face. What was I crying about? I honestly can’t remember. My hormones were raging so aggressively that everything around me prompted me to either get angry or get so emotional that I would just cry. Seriously, it was like a war zone in our tiny New York City apartment, just ask any delivery man who attempted to bring a messed up take-out order to my front door. I was behaving crazy, I own that. My emotions ran hot throughout every single trimester and my pregnancy truly made my marriage more difficult.

Then I heard him say it from the bathroom: “I can’t wait for this pregnancy to be over. We’re not having any more kids.” My husband spoke in a raised voice.

During my second pregnancy, I made life difficult for those around me because I was so moody and sensitive all the time, something that didn't happen nearly as intensely during my first pregnancy. Everything rubbed me the wrong way and you never quite knew which version of me you were going to get when we started a conversation. I noticed it starting about halfway through my second trimester and I'm sure it was a direct result of hormones and feeling the pressure to get things done before baby's arrival, plus working like a crazy woman so that I could actually have some downtime once our daughter was born. It all weighed heavy on me.

My body was busy growing a tiny human, and all that extra work was making me overly emotional.

"At a biological level, the hormones estrogen and progesterone are ramping up, and some women are more sensitive to progesterone changes and this may make them more irritable," said Dr. Mary Kimmel, medical director of the Perinatal Psychiatry Inpatient Unit and an assistant professor of psychiatry the University of North Carolina School of Medicine in Chapel Hill, to Live Science. This was me. I was irritable every single day for nine months and beyond, and it certainly put a burden on my relationship. My husband didn’t know whether to embrace me or leave me alone. He didn’t know what would offend me or make me cry, and he was never quite sure how to approach me to ensure that no tears were involved.

My life became a cycle of saying “no one understands me,” and the truth was that my husband was no exception.

It started with not wanting to cook (because, well... everything made me want to throw up), which led to me never being able to decide on what I wanted to order for dinner. Then I became obsessed with cleaning and re-decorating our entire apartment, something I insisted on talking about all the time. I also couldn’t keep my eyes open past 8 p.m. every night, which prompted numerous arguments because I would fall asleep halfway through a Netflix episode every single night — and I would of course make sure my husband stopped watching so we could pick up later and watch it together.

He didn't know what it was like to carry around all that extra weight everyday, yet still need to carry myself up and down NYC subway steps and be exhausted at the end of the day. Or how getting up five times a night to pee totally disrupted my sleep — yet I still needed to get our son to the bus stop at 6:50 every morning, Monday through Friday.

These weren’t major arguments, but boy, did my pregnancy hormones make the day-to-day of being married more difficult than it should have been. I never spoke to my doctor about it because I knew this wasn't "my normal," it was pregnancy-related and something I felt I could still manage on my own. My husband understood. He knew that I just needed to get through the pregnancy, and I would go back to being the woman he'd married. Our marriage was never in a place of true jeopardy, but boy, does pregnancy make things rough. For me, it all boiled down to him not being able to fully understand me or how I was feeling. But how could I expect him to? He's never physically been pregnant before.

He didn't know what it was like to carry around all that extra weight everyday, yet still need to carry myself up and down NYC subway steps and be exhausted at the end of the day. Or how getting up five times a night to pee totally disrupted my sleep — yet I still needed to get our son to the bus stop at 6:50 every morning, Monday through Friday. I longed for my old workout routine I could no longer do, foods I temporarily couldn't eat and a day where I looked in the mirror and I wasn't breaking out. I was mad at the world and everyday was a challenge because he couldn't feel those things I was feeling.

Thank goodness that through all of this, our sex life was still the same. In fact, towards the end of this pregnancy I pounced on him so often he was very forgiving for my awful attitude. He didn't really care if it was because I was super turned on or just trying to get this baby out. Either way, he was getting some and it made him smile ear to ear. But outside of the bedroom, my life became a cycle of saying “no one understands me,” and the truth was that my husband was no exception. Hell, I barely understood myself, so how could I expect anyone else to?

The funny things is, about a month after our sweet little girl was born, my husband rolled over in bed one night and told me he wanted to have one more. I just smiled and let everything that happened during my recent pregnancy become a distant memory, because when that little baby is in your arms, you forget about anything bad in the world. Their love and your love for them takes over and brings a closeness between you and your partner that take your marriage to a place of strength that you never knew was possible.

And today? My husband and I are still closer than ever.