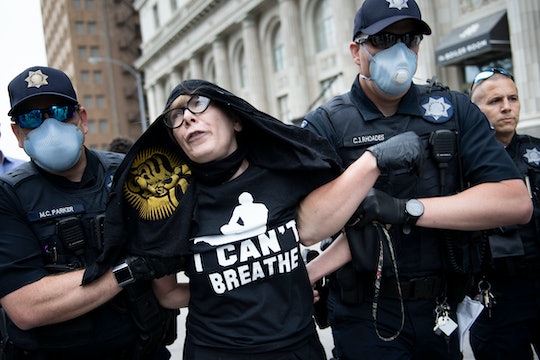 Tulsa police said they were directed by the Trump campaign to arrest a teacher who attended the president's campaign rally in Tulsa, Oklahoma, on Saturday wearing a black "I Can't Breathe" shirt. Despite having a ticket to the rally, 62-year-old Catholic school art teacher Sheila Buck was arrested for obstructing officers after Donald Trump's campaign staff spotted her praying in peaceful protest against police brutality at the rally. Now, the teacher arrested at Trump's rally is speaking out.

"Tulsa Police were requested by Trump Campaign Staff to remove an individual from the secure area of the rally," the Tulsa Police Department said in a statement shared Saturday over social media. "Police spoke to the arrestee, Ms. Buck, for several minutes trying to convince her to leave on her own accord. After several minutes requesting her to leave, she continued to refuse to cooperate and was escorted out of the area and transported to booking for obstruction."

Buck told The Washington Post she'd reserved a ticket to Trump's rally in advance with the sole purpose of attending in support of the Black Lives Matter movement. "There are some things worth dying for, and I'm tired of seeing what's happening and what's being done to black lives in Tulsa, Oklahoma, specifically, but in this country," Buck told the paper.

After teaching in Tulsa's predominantly Black elementary schools for at least a decade, Buck said she'd seen first-hand the discrimination Black students face. "I have seen how they’re treated when I took them on field trips," she told The Washington Post. "This was a chance for me to have my voice heard."

"I Can't Breathe," the message printed on Buck's shirt, has been a slogan used in the Black Lives Matter movement since Eric Garner was killed after police in New York City held him in a chokehold in 2014, " as The Guardian reported. In May, George Floyd repeatedly told police he could not breathe as an officer kneeled on his neck for over five minutes, according to The New York Times. Recent protests against police brutality and systemic racism have renewed use of "I Can't Breathe" as a protest slogan.

After passing through security and in to an outdoor area reserved for rally attendees, Buck knelt down and began praying. Video of Buck's arrest captured by MSNBC showed officers approach her and tell her they were going to forcibly remove her as she was trespassing.

"I have a ticket," Buck can be heard telling the officer in video captured by MSNBC.

In an interview with Tulsa World, Buck said police told her that having a ticket didn't mean she was wanted at the event. "I was surrounded and was told I could not go any further and that I was trespassing on a private event and I wasn't wanted there," Buck said. Video of Buck's arrest show two police officers then pick Buck up off the ground by her arms and drag her out of the area before placing her in handcuffs. Buck later told The Washington Post her arrest had left her with bruises and lacerations on both arms.

In a statement released Saturday, Tulsa Police said Buck's status as a ticket-holding attendee did not impact officers' ability to arrest her. "Whether she had a ticket or not for the event is not a contributing factor for the Tulsa police in making the arrest," the department said. "Officers at the location, particularly in the 'Sterile' area, will remove individuals only at the direction of Campaign Staff." Romper has reached out to the Trump Campaign for comment.

The American Civil Liberties Union (ACLU) has condemned Tulsa Police's arrest of Buck and accused the department of having an aggressive response to recent protests. "While Tulsa Police say they were following orders from the presidential campaign to remove Sheila Buck, and news reports indicate that request was made because of her shirt (a black t-shirt depicting the outline of a person kneeling on another's neck with the text I Can't Breathe), the scene was one that felt familiar to those who have encountered Tulsa Police previously or watched their aggressive response to protests over the last several weeks," the ACLU said in a statement.

According to the ACLU, Buck spent several hours in police custody before being booked on a misdemeanor charge that could carry a penalty of up to a $500 fine and/or one year in jail. Additionally, they claimed she would have had to pay a bond of $500 to secure her freedom. "This arbitrary process is inconvenient at best, but for many Tulsans, it leads to weeks or months, sometimes years, of pre-trial incarceration, public repercussions that can include loss of job or housing or custody, and all without a trial or conviction," they said.