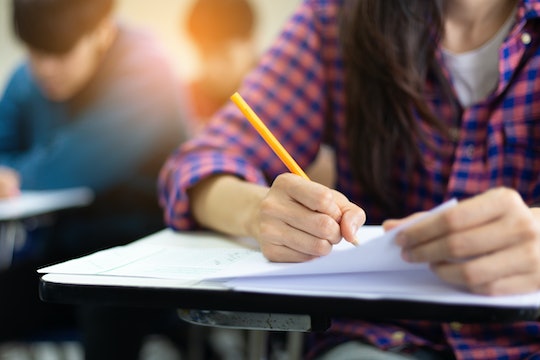 Every once in a while, a headline comes up that just makes me want to do something. You know, like call a political representative, throw something at the TV, or just rail against the state of the world. And if you're anything like me, you might feel a certain way about this story regarding a teacher who allegedly cut his student's hair as punishment for misbehavior. The mom of the student in question is outraged, and now she's calling for the teacher's removal.

The trouble allegedly began when Jillian Miglionico's middle school-aged daughter came home from school at Somersworth Middle School in Somersworth, New Hampshire one week ago, according to CNN. Miglionico says her daughter recounted what would sounds like the worst day ever: After her teacher told her daughter to stop playing with her hair, he allegedly took scissors to it and cut a chunk of it off, according to CNN affiliate WMUR-TV.

Miglionico was later interviewed about the incident, claiming the teacher in question threatened her daughter. "He threatened her and he said, 'Well, if you don't stop playing with your hair, I'm going to cut your hair off,'" she alleged to the WMUR-TV. "'And she was like, 'No, you can't do that.' And he said, 'Yeah, watch me.'"

“He grabbed her hair and cut off a good three-inch chunk,” she alleged.

As for Miglionico's daughter's reaction? "She had to defend herself and put her math binder in her face for protection. Anything could have happened to her," she claimed. Miglionico said her daughter "wasn't even the one to report the incident because she was scared and embarrassed."

The upset parent claims that, although the supposedly principal contacted her a week ago at the time of the incident, she wasn't clear on what disciplinary action or staff changes have been made at the school. Miglionico alleges the teacher was absent from school for three days during an internal investigation, but soon returned to the same classroom as her daughter.

Superintendent Robert Gadomski of the Somersworth/Rollinsford School District and Somersworth Middle School did not immediately respond to Romper’s requests for comment regarding the alleged incident.

Gadomski told CNN, however, that officials "moved swiftly to address the situation" and that "supports were in place to ensure the safety and success of students in the classroom."

He continued, "Secondly we handled the situation as a personnel issue using our district policies and procedures."

Still, Miglionico shared how she's not happy with the way things were supposedly handled. "If you're going to act like that with a middle school student, I don't think that you should be able to be around and teach middle school students," the mother told WMUR-TV. "I don't want this man around my child."

It's important when we hear stories like this not to get too upset because most teachers are dedicated professionals who help students flourish. But it's also important we hold school districts and their employees accountable if something does go wrong. The teacher in the California case, for example, previously had her teaching credentials suspended twice before the incident, according to Inside Edition.

I can't say for certain what happened in this case, but I hope the rest of the school year goes well for Miglionico's daughter.