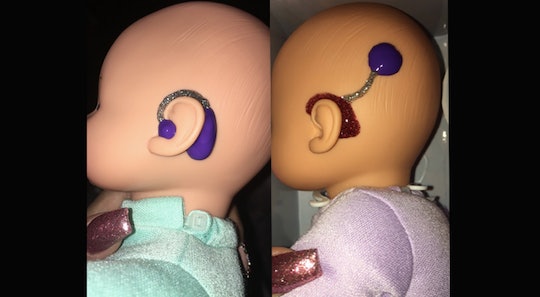 Exceptional teachers have the power to change the lives of their students in profound ways, and one California teacher is doing just that. Meet Genesis Politron, a pre-k and kindergarten teacher who paints hearing devices on baby dolls in an effort to make her students feel represented and empowered.

Politron, who has been working with students with hearing loss for four years and teaching full-time for two, was shopping for new toys for her class when she realized she couldn't find a doll that accurately resembled her students. "I thought of all the times that I played with my own dolls as a little girl, and how I'd always reach for the doll that I identified with most," Politron explains to Romper via Twitter. This is what led her to be creative with her students' new toys, saying how she wanted them to have the same opportunity "to be represented in the toys that they play with."

In an effort to draw awareness to this issue, Politron took to Twitter on Sept. 26 to share images of the dolls that she painted two kinds of colorful hearing devices, hearing aids and cochlear implants, onto. She captioned the shot, which has since received 153,000 likes as of Sunday, "I wish everyone could see their faces playing with these."

"It's so exciting to watch their interactions with [the dolls], and watch as they identify with the doll that resembles them," Politron shares with Romper, noting that her students have not been able to put down the baby dolls ever since she introduced the added hearing accessories, with some of her students "feeding" their "babies" every day and "rocking them to sleep."

Politron says that while it's her job to be as inclusive as possible as an educator, she believes inclusivity "should just be part of being a human being."

"No child should ever feel as if they they aren't 'normal' or as if they don't belong," she adds. "I want my students to be proud of such a special part of their identity."

In recent years, there has been a greater push for retailers to consider representation and inclusivity in products and media, all the way from hijabi barbie dolls to dolls in wheelchairs.

Politron wants to remind others why this kind of inclusion is important, especially since her students make up a large group of the population. That's because about two to three out of every 1,000 children in the United States are born with a detectable level or hearing loss in one or both ears, and one in eight people in the United States (or 13 percent) over the age of 12 experience hearing loss in both ears, According to the National Institute on Deafness and Other Communication Disorders (NIDCD). Since December 2012, roughly 38,000 cochlear implants have been implanted in children in the United States, according to the American Speech–Language–Hearing Association.

For those children and others who aren't represented, Politron says she hopes "change is truly made."