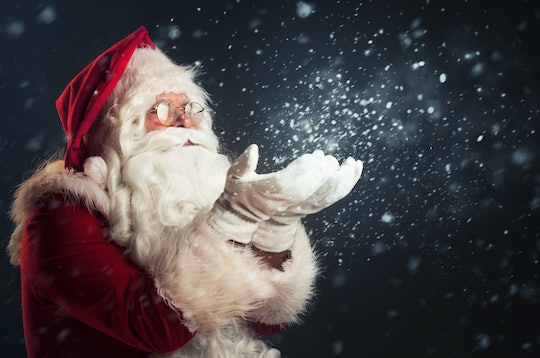 Keeping the magical wonder of Santa Claus alive in your home can be hard enough without naysayers bringing you down. So when someone does interfere with your family's Christmas traditions, the natural reaction is, well, outrage. Case in point, when a Brooklyn teacher told first graders that Santa Claus isn't real, parents were understandably upset.

Parents of Park Slope's P.S. 321 told local Brooklyn news outlet News 12 that their little ones came home with tears in their eyes last Monday after a teacher reportedly told them that Santa isn't real. And to add insult to injury, the teacher also reportedly told the students that the Tooth Fairy isn't real either. The painful truth came during a lesson on "convincing," according to News 12, and parents were left trying to explain to their children why the teacher isn't a believer.

While Romper's request for comment from P.S. 321 was not immediately returned, the school's principal, Liz Phillips, explained to local Fox News affiliate KTVU 2 that the teacher was only a substitute for the class and explained in a letter that the school is investigating the incident. Phillips also assured parents that she was not happy about it either.

“I am extremely upset that the substitute teacher told the children that Santa Claus and the Tooth Fairy are not real. This discussion was completely inappropriate to have in school with first graders,” Phillips wrote in the letter, the New York Post reported. “It was a terrible lapse of judgment on his part, and it never should have happened. I guarantee you that this substitute will not be in class 1-216 again.”

But parents still weren't satisfied, particularly due to the upcoming holiday. "It's three weeks before Christmas," one mother told News 12. "These kids are 6 years old."

Parents continued to express their outrage when speaking to the New York Post after the fact. “People are mad," one father told the news outlet on Friday. "That’s not his decision to make." Another suggested that the lesson was "damaging" to the kids.