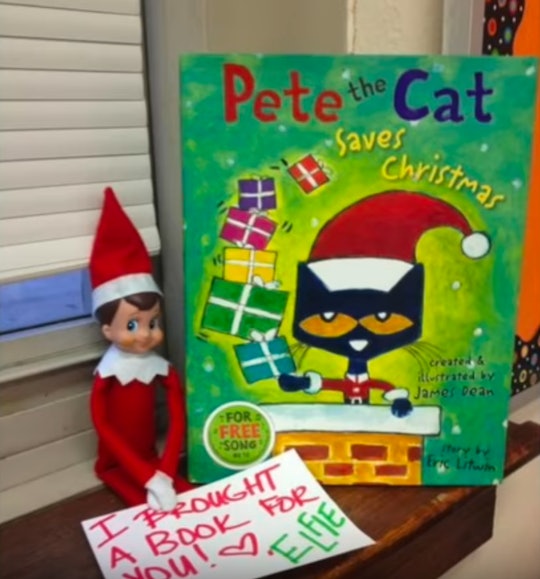 Some Teachers Have A Class Elf On The Shelf, So Looks Like Parents Get A Break

In fact, it has become so popular in classrooms that Elf on the Shelf has a whole site full of teacher resources with print-outs, lesson plans, and other ideas.

There are definitely some major pros for having an Elf on the Shelf in a classroom setting, according to Jennifer of Simply Kinder. For instance, teachers can use their Elf on the Shelf to inspire some great conversations. Ask the children questions like, "How long do you think it took our Elf to reach our classroom?" to spur creative discussion.

Teachers could also use them to give the class a lesson on voting when picking the Elf's name, complete with mock ballots and voting booth. Other teachers have used their Elves to re-enforce good behavior or curb naughty behavior. For instance, if a class is extra well-behaved an Elf might bring a special treat. But if a class is not listening, then the Elf might not show up at all. Yikes!

And of course there are a few cons as well, according to the post on Simply Kinder.

December is a notoriously busy (and short) month for teachers, so having to deal with another holiday element might just be the tipping point for some. Teachers also run the risk of elf burn out if they have one at home and at school. Finally, older children may loose interest in the Elf, making the teachers hard work unnoticed. And, of course, one of the biggest cons is being sensitive to those children who might not celebrate Christmas. Checking in with parents first is always a smart idea.

But the drawbacks don't seem to faze teachers all that much. A quick internet search will reveal quite a few ideas for teachers looking to add the Elf on the Shelf into their classroom this holiday season. Some of them are quite impressive and might just work at home as well (in case any moms or dads out there are fresh out of ideas).

If you're not familiar with the Elf on the Shelf concept, here's the deal. These elves are Santa's scout elves, and they're sent to homes all over the world to observe and report back to Santa so he can properly compile his famous naughty and nice list. Each night, the scout elf returns to the north pole to give Santa the deets. When they return, they perch themselves in a new spot, waiting for the children to find them the next morning. But you can never touch them, or they'll loose all of their magic.

In turn, this leaves the creation of Christmas magic to the parents, who have to think up funny and interesting scenarios for the elf to be caught in by the kids — Every. Single. Morning. And if that wasn't enough, there's a ton of competition out there from Pinterest and Instagram parents who seem to have the whole Elf on a Shelf game mastered.

Then there's the fear of forgetting to move the Elf, resulting in a mad dash before the kids discover your holiday blunder.

So, does your child's classroom have one this year? If your child's classroom is sans elf, you could always think about donating your family's elf. Really, that's a win, win situation. No more last minute set-up on your part and a little bit of Christmas magic at school for the kids. Teaches love donations! Here's hoping some teachers continue to keep the Elf on the Shelf tradition alive, because it's all about the children during the season, right? And while some children might not celebrate Christmas, it's the idea of what the Elf on the Shelf encourages that should be commended — one that promotes good deeds and behavior all season long.