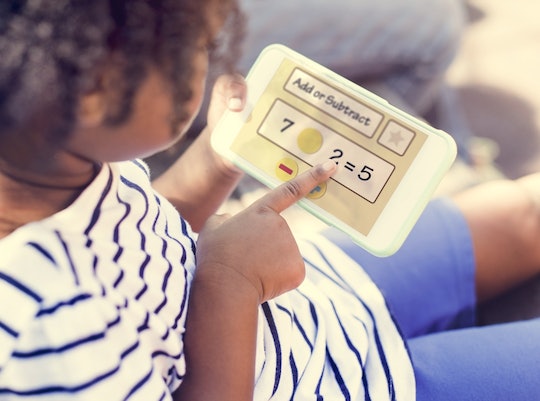 Parents form the basis of a child's education before they even step foot on school grounds. Reading together is often an important part of a nightly routine, but parents may want to consider sneaking some math in there, too. That's because a new study suggests that teaching preschool kids math at home helps them learn more that just numbers. In fact, researchers at Purdue University found that children between the ages of 3 and 5 who do activities involving math at home with their parents not only gain valuable arithmetic skills, but also increase their general vocabulary.

Lead researcher in the study, Amy Napoli, who is also a doctoral student in the Purdue Department of Human Development and Family Studies, told Science Daily that math activities led to a greater increase in vocabulary than even those centered around English. She told the outlet that this could be due to the amount of communication involved in teaching math, explaining:

Exposure to basic numbers and math concepts at home were predictive, even more so than storybook reading or other literacy-rich interactions, of improving preschool children's general vocabulary. And one of the reasons we think this could be is the dialogue that happens when parents are teaching their children about math and asking questions about values and comparisons, which helps these young children improve their oral language skills.

The study included 116 preschoolers, between 3 and 5 years old, with researchers assessing their math and language skills first in the fall and again in the spring of the school year. They also looked at parents' reports on math and literacy learning at home in order to predict children's improvement throughout the year. Researchers cautioned that the study's findings are strictly correlational and more research is needed to further evaluate cause. For this reason, research is ongoing at Purdue's Department of Human Development and Family Studies. The findings, published online in the Journal of Experimental Child Psychology, included recommendations that parents start exposing children to basic math early on in their lives.

Senior author of the study and assistant professor in the Department of Human Development and Family Studies David Purpura said, according to Purdue University, is "never too early to learn about math and numbers," mentioning that "more" is often one of the first words that children learn. Including even the most basic terms associated with counting — numbers, and more and less — can make interactions math-focused and purposeful such as "there are three cookies for a snack" instead of "there are cookies for a snack."

Unfortunately, math isn't quite a hot topic at home. Napoli told Purdue University that this is in part due to parents feeling inadequate to teach math:

This focus on math typically isn't happening at home, but this shows that when parents do include math concepts it can make a difference. When working with families, there is a math-related anxiety aspect and that is probably why more parents focus on literacy than on math. But, if you can count, then you can teach something to your child.

The importance of including math in the home is amplified by the fact that it is barely included in preschool class schedules. Research group Brookings reported that preschool children who spend six hours a day in class only use an average of 58 seconds per day on math. That's right, not even a full minute of class time. However, many preschool curriculums do include math. A 1998 study found that only 4 percent of a nationally representative sample of American children entering kindergarten were able to add and subtract. In response to that, many pre-K programs are preparing students for Common Core standards that include algebraic thinking, according to Brookings. Considering the conflicting research on class time and curriculum, parents may want to do what they can to make up the difference.

Along with improved language abilities, math also teaches children logic and critical thinking skills that will be crucial to them later in life. Dr. Jie-Qi (Jackie) Chen, professor of Child Development at the Erikson Institute, a principal investigator of the Early Math Collaborative, and author told GreatSchools that early education is the key to providing children with these skills:

Math is the language of logic. Math builds reasoning, which leads to comprehension. Developing a mentally organized way of thinking is critical. We need to provide high-quality math education at an early age.

Finding the time to include math lessons in an already hectic life may sound like a monumental task. But even just small changes in the way that parents talk to children about their daily activities can prepare them for future learning success. Considering the benefits, spending a little extra time on math at home seems like a no-brainer.