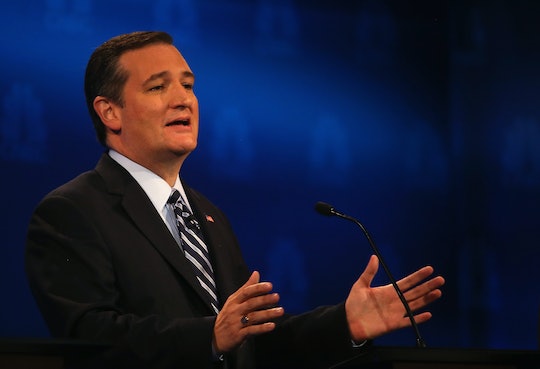 When it comes to the silliest thing said during tonight's fifth GOP debate on CNN, there's a two-way tie. Let's take a vote: Donald Trump shutting the Internet down or Ted Cruz saying that moderate rebels were "purple unicorns," with his point was that they don't exist. Hold the phone. Does this mean Cruz thinks normal-colored (what color are they?) unicorns exist? And how does he know some rebel isn't having second thoughts somewhere? And why would you say "purple unicorn" in public, during a presidential debate? Twitter was waiting to tear Cruz about apart for his "purple unicorn" comments and the social network has totally taken it to a new level.

What was he trying to say, really? While he went head to head with Marco Rubio about what to do about Bashar Assad. He tried to explain:

We keep hearing from President Obama, Hillary Clinton and Washington Republicans that they're searching for these mythical, moderate rebels. They're like unicorns. They never exist. These moderate rebels end up being jihadists.

It doesn't matter what kind of point he was weirdly trying to make. What matters is that the world is a better place because of Twitter (or a worse one, depending on how you look at it). It's like all the mean kids in high school making fun of a kid in the cafeteria. Is it bullying? Nah, he brought it upon himself:

What would we do without Twitter? Although some took it pretty seriously: