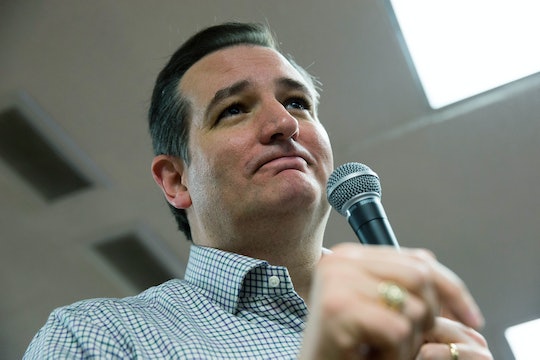 On Sunday, a group of armed men — including the sons of rancher Cliven Bundy — took over a federal building at an Oregon wildlife refuge. Since then, the internet has heavily debated whether the incident should be considered terrorists and the militia terrorists. But something more people are taking note of is the deafening silence of presidential candidates on the matter. So far, only two Republican presidential candidates have addressed the Oregon militia takeover, which is surprising given how much of the debate surrounds Second Amendment rights.

So far, only Florida Sen. Marco Rubio and Texas Sen. Ted Cruz have publicly commented on the issue. According to the Huffington Post, Cruz denounced the takeover before an Iowa campaign event. The Republican frontrunner (behind Donald Trump, of course) told reporters, "Every one of us has a constitutional right to protest, to speak our minds, but we don’t have a constitutional right to use force of violence or threaten force of violence on others." Being one of the first Republican candidates to make their thoughts known, Cruz went on to further criticize the group’s actions:

There is no right to engage in violence against other Americans, and it is our hope and prayer that that situation resolves itself peaceably sooner rather than later.

Rubio was a little more blunt about the Oregon takeover on Iowa radio station KBUR Monday morning: “You can’t be lawless,” Rubio, said, according to BuzzFeed. “We live in a republic. There are ways to change the laws of this country and the policies. If we get frustrated with it, that’s why we have elections. That’s why we have people we can hold accountable." Rubio also used the takeover to call attention to how much control the federal government has over land, according to BuzzFeed:

And I agree that there is too much federal control over land especially out in the western part of the United States. There are states, for example, like Nevada, that are dominated by the federal government in terms of land holding and we should fix it, but no one should be doing it in a way that’s outside the law. We are a nation laws, we should follow those laws and they should be respected.

None of the Democratic candidates have spoken out about the militia standoff either, which is also notable. But, when or if they speak out, they will likely condemn the standoff and also use it as a reason to call for gun control reform, echoing Cruz's language that citizens shouldn't be threatening other citizens.

The lack of comments is more noteworthy for Republicans, who are all against instituting any sort of gun control reform. Republicans' silence becomes even more strange given just how many Republican candidates previously praised Bundy when he launched a standoff with government officials in 2014, refusing to remove his cattle from federal land, according to Think Progress.

“There is a legitimate constitutional question here about whether the state should be in charge of endangered species or whether the federal government should be,” Kentucky Sen. Rand Paul told Fox News in April 2014, also shooting down Sen. Harry Reid’s claims that the rancher was a domestic terrorist.

The incident at the Oregon Wildlife Center is steeped in conservative politics, according to Business Insider, so why aren’t more Republican candidates weighing in? Debate after debate has set aside time to talk about gun control and states’ rights. But when a group — led by Ammon Bundy, whose father was by all means a conservative sweetheart — takes over a federal building while wielding guns, there is no influx or press releases or TV appearances from GOP hopefuls? The silence says more than any words can.

If Republican candidates endorse how the militia standoff in Oregon, then they are attacking the very rule of law they’ll depend on as president. And if they condemn it, like Cruz did, then they may lose support from gun rights activists. What they say and who they say it when they do speak out could determine whether the issue is swept under the rug or addressed seriously.