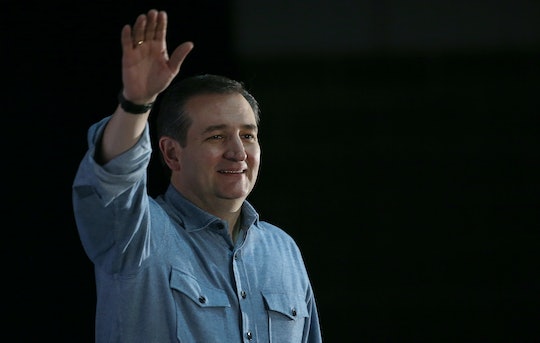 Ted Cruz Wins Iowa, But Can He Land The Nomination?

Folks, the results are in: Ted Cruz has won Iowa. Just before Republicans took to the caucuses in Iowa Monday night, billionaire businessman Donald Trump had just pulled ahead to top the polls, according to The Des Moines Register. Trump was leading with 28 percent, followed by Texas senator Ted Cruz at 23 percent and Florida senator Marco Rubio at 15 percent. However, Cruz pulled out of second place and won in Iowa, taking home 28 percent of the vote and toppling Trump for the lead. The entire race for the Republican nomination also drew much closer, with Trump ending at 24 percent and Rubio closing things out with 23 percent.

However, will Cruz be able to land the nomination? Iowa has historically been an important state to win over on the road to a nomination. As the first state to vote, it can point out how well a candidate's support stands, and which candidates may as well drop out (O'Malley, we'll miss you). It's not a shoo-in for nominee victory, though — only about half of the candidates who have won in Iowa have gone on to secure the nomination for their party.

This is only the beginning of a long road for Ted Cruz and the other candidates aiming for the nomination — and voters will be there clinging to their every word for the remainder of the primary season.