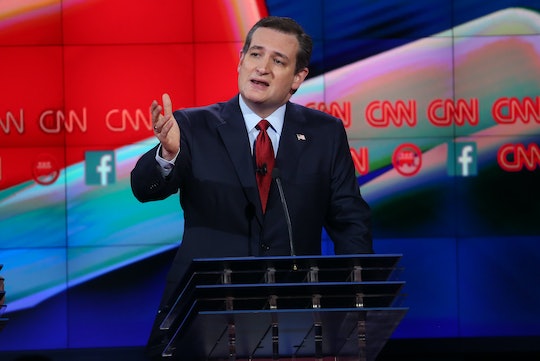 Ted Cruz's Closing Statement At The GOP Debate Was Short, Sweet, & To His Point

Ted Cruz has had a good month. And Cruz’s closing statement at the GOP debate Tuesday was a solid way to close it out. He was the candidate to watch Tuesday, since he’s lately been climbing in the polls and taking attacks from all sides. The most interesting thing about Cruz is the line he walks somewhere between Trump and Rubio and his debate performance spoke to that dual.

After a week of going back and forth with Donald Trump — tweeting that the reality star-turned-candidate was a maniac — the duo finally duked it out Tuesday. Cruz even took a few jabs at his opponents, although he largely left the political theater behind. His closing statement touched on a lot of the topics we expected him to, like the military and the economy. The most interesting thing about Cruz is the line he walks somewhere between Trump and Rubio and his performance at Tuesday's debate spoke to that dual.

He started his closing statement by returning to his point about America becoming a leading nation again:

Judgement, strength, clarity, and trust. Barack Obama has said he doesn’t believe in American leadership or American winning. He is wrong. America can win again, and we will win again.

And he moved onto paying tribute to Ronald Reagan:

Our strategy is simple. We win, they lose. We’ve done it before and we can do it again.

He kept it short and sweet and managed to reiterate every stance he’s taken since the last debate. Even Twitter was sort of feeling him:

Trump is leading in the polls, but he should be a little worried about Cruz. If the senator keeps showing up like this, the whole election cycle is turned upside down.