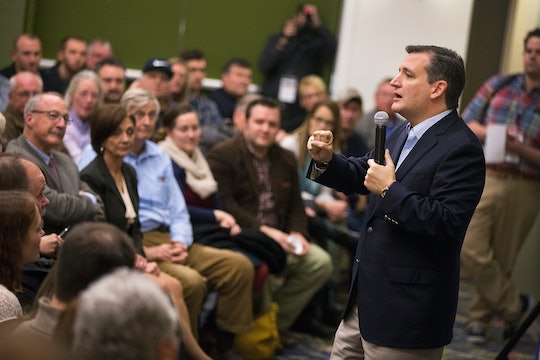 Monday night at a town hall in Bettendorf, Iowa, an audience member asked Republican presidential candidate Ted Cruz about his stance on contraception. A supporter asked him what “women who want to control their bodies” should do to you, you know, decide when and how they get pregnant. Cruz's answer pretty much summed up everything he thinks about women's reproductive rights: condoms. (Bear with me here, because this is the part where you’re going to have to think about Ted Cruz having sex. I’m sorry, but this is important.) Cruz said:

When the ‘war on women’ came up, the Republicans would curl up in a ball and say ‘don’t hurt me.’ Jiminy cricket! This is a made up, nonsense example. Last I checked, we don’t have a rubber shortage in America. Look, when I was in college, we had a machine in the bathroom. You put 50 cents in and voila!

I know, it’s bad right? And not just because you're now visualizing a young Ted Cruz at a bar preparing to hook up with someone. Here's what's exceptionally wrong and telling about his answer: Suggesting that condoms are the only possible forms of contraception means that Cruz thinks birth control should be controlled by men. It's like he forgot that the Pill happened or why we needed it. The Pill didn’t just change the lives of women when it was approved by the FDA fifty years ago — it changed the whole country. Female contraception played a huge role in giving women the independence to plan their education and career goals around having a family. And hey, Mr. Cruz, men benefit from all of that as well (and probably the economy, too, if you're into that sort of thing).

Over the course of the evening, Cruz also attacked Hillary Clinton’s positions on reproductive rights, namely abortion. Clinton is for “abortions on demand” he told a room full of believers. Cruz himself believes that companies shouldn’t have to pay for birth control for women.

So basically don’t ask Cruz about his stance on reproductive rights for women because he doesn’t believe women have any. Your only hope for not getting pregnant is relying on a guy to have condoms on hand or a quarter in his pocket for an on-the-fly purchase from "a machine in the bathroom." Thanks, Ted.