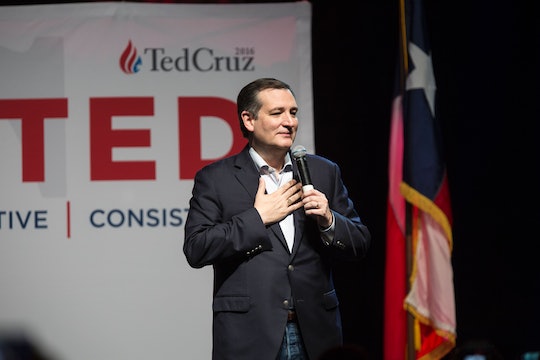 Ted Cruz's Super Tuesday Speech Was All About Trump

All of the Republican candidates went into Super Tuesday hopeful that they might pull ahead in the race, but most eyes were on Texas Sen. Ted Cruz, who stood to win (or lose) the most, outside of billionaire front-runner Donald Trump. Cruz's Super Tuesday speech from Stafford, Texas addressed all of the hard work his team and supporters had put into turning out the vote, maintaining conservative values, and the importance of the Republican party winning the White House next year. And taking on Donald Trump.

Many political insiders, and Cruz himself, felt that Tuesday was a "Judgement Day," according to Politico. They weren't totally wrong. Cruz's first win came in Texas, where he took almost 40 percent of the vote ahead of both Cruz and Florida Sen. Marco Rubio. He also came ahead in Oklahoma and finished second in Alabama, Arkansas, Georgia, Minnesota, and Tennessee. Super Tuesday's results really could have gone either way for the candidate.

Cruz's speech on Tuesday focused on Donald Trump, who had called him out for working hard to get to second place in many states. The Senator thanked him but reminded supporters that his was the only campaign that had been able to beat Donald Trump in any primary, "not once, not twice, but three times." He went right for Trump, saying:

We can nominate a Washington deal maker, profane and vulgar, who has a lifelong pattern of using government power for personal gain. Or we can nominate a proven conservative who has fought consistently for working men and women and to defend the Constitution.

Those are fighting words, for sure.

Cruz's campaign was especially interested in Alaska as the results were likely to be in his favor, without ever even having to go campaign there. Leading up to Tuesday, Jason Miller, a senior adviser to Cruz told CNN that the state was, "very much an anti-big government, anti-Washington, strong libertarian" tendencies. "I think it demographically really stacks up well for us," he concluded.

Although going into Super Tuesday Cruz's campaign was ready to go either way, after coming in strong seconds all night, his campaign seems to have caught a second wind. Miller also told CNN that they have recently increased their media spending and are already looking ahead to California, which doesn't even vote until June. Cruz's message tonight of "standing together" was a clear message to other candidates and voters that he is ready to take Trump head on.

Super Tuesday was a do or die moment for Cruz and it looks like he might have even surprised himself with the results. Now it's all about waging war with Trump.