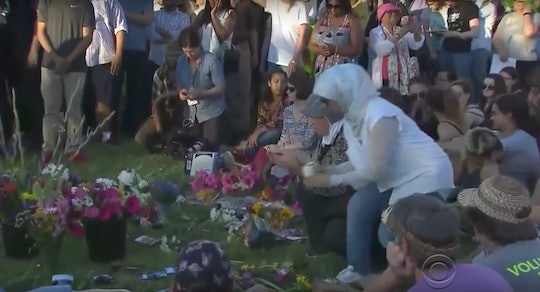 Teen Targeted In Portland Has A Message

Portland's Memorial Day weekend launched in tragedy Friday afternoon, when a man shouting hate speech on a light rail train allegedly stabbed three men who intervened, killing two and seriously injuring another. The tale of the men's heroism has been dominating headlines ever since, as much of the country celebrated their willingness to defend the two teenage girls that the alleged suspect had targeted with his terrifying rant. Now, one of the teens from the Portland train attack has a message for the families of the two men who died, as well as a more detailed accounting of what exactly happened that day.

As everyone from politicians to their own family members hailed the men — Taliesin Myrddin Namkai Meche and Ricky Best, who died, and Micah David-Cole Fletcher, who is recovering in the hospital — as true heroes, 16-year-old Destinee Mangum has been dealing with the ramifications of what she personally experienced and witnessed on that train.

It all started when she and her 17-year-old friend, who was wearing a hijab, encountered the known white supremacist allegedly responsible for all the horror that would soon transpire. "He told us to go back to Saudi Arabia and he told us we shouldn't be here, to get out of his country," Mangum tearfully told CNN affiliate KPTV. "He was just telling us that we basically weren't anything and that we should kill ourselves."

Around the same time that she and her friend moved to the back of the bus to get away from the man screaming what police later called "hate speech toward a variety of ethnicities and religions," the men moved in to try to calm him down and convince him to leave the train. Another passenger, Rachel Macy, later told The Oregonian that it seemed like they "were trying to be a barrier" between the white supremacist and the girls.

They accomplished that goal, but at a cost. The man stabbed each of them. In Mangum's memory: "...it was just blood everywhere and we just started running for our lives."

Best, a father, army veteran, and city employee died at the scene at 53; having recently graduated college with an economics degree and begun work at a consulting firm, 23-year-old Namkai Meche died not long after. Fletcher, 21, whose anti-Islamophobia entry had won a poetry contest when he was in high school, survived, perhaps thanks to an Iraq War veteran who assisted him on the train platform.

When she thinks of them, Mangum, who is not Muslim, feels grateful, according to KPTV:

The families of the men who were killed are surely experiencing an unimaginable onslaught of grief as they process what happened; they also have every reason to feel proud of the men's actions. Hearing from Mangum, whom Best, Namkai Meche, and Fletcher all aided, will never erase their pain, but hopefully it will act as a balm to know that the men made the world a better place even as they fell victim to such violence for their decency.