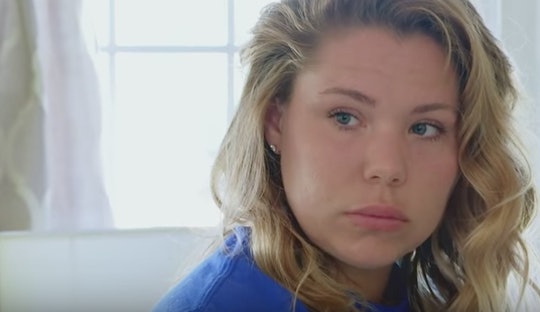 On Saturday, Teen Mom 2 star Kailyn Lowry gave birth to her third baby boy. If you've been following Lowry's journey throughout the years, you know she adores being a mom. Although parenting hasn't always been easy for Lowry (what parent doesn't struggle from time to time?), she has always handled her issues in stride. Given the Teen Mom 2 star's ups and downs, it's no surprise that Kailyn Lowry's quotes about motherhood keeps things real.

When viewers first met Lowry in 2010, she was a new teen mom with a lot of personal problems. Aside from unexpectedly getting pregnant in high school with her boyfriend at the time, Jo Rivera, Lowry was also estranged from her parents. Lowry's dad was never in the picture, and her mom allegedly struggled with alcohol abuse. From day one, Lowry had to endure a lot of adversity.

After a few years parenting as a single mom (Rivera allegedly wasn't too hands-on in the beginning), Lowry met her first husband Javi Marroquin. Although Lowry and Marroquin welcomed a son in 2013, they suffered a devastating miscarriage in 2015. Shortly after the miscarriage, Lowry and Marroquin went through an ugly divorce. During the tumultuous split, Lowry learned she was pregnant with her third child, but the baby's father reportedly expressed no interest in being a part of the child's life.

As one might imagine, Lowry's difficult life has led her to not care about other people think, especially when it comes to her parenting. Who has time for a stranger's opinion when you're dealing with a ton of personal problems?

That being said, in 2014, Lowry clapped back at fans for criticizing her decision to breastfeed in public. Lowry said, according to The Hollywood Gossip:

Like I’ve said to many people, if my baby’s hungry then I’m going to feed my baby whether other people like it or not. So at the end of the day, the negative comments don’t really matter.

In addition to getting flak for breastfeeding in public, Lowry received shade when she befriended Rivera's now fiancée, Vee Torres. The good news: Lowry was not phased by the judgment. Lowry said, according to People:

It’s so funny because my friends from school, they don’t understand how I could be friends with my son’s father’s girlfriend, But Isaac will probably go to college, he’s going to start a family, we’re all going to want to be involved. I look back when I was [in my teens], and I’m like, why did it take this long to get where we are? We’re all friends and it’s just awesome.

Despite all of the controversy and public drama, Lowry has managed to maintain a Zen approach to what life has thrown her way — including her painful miscarriage. Lowry said, according to E! Online:

I like to think that everything kind of happened for a reason – I’m not really sure what the reason was yet for that, but I’m just constantly reminding myself that there was a reason why this happened.

Although Lowry's miscarriage was extremely difficult, to say the least, it taught her to be prepared for the unexpected. When Lowry unexpectedly became pregnant with baby number three, she had a calm and positive outlook on the situation. Lowry said, according to MTV:

I know this isn’t an ideal situation but I know everything will be okay. And like I say in my book — with a little bit of hustle and heart, I can and I will survive anything. Having another child is something I am so happy about and I just can’t wait.

If you know anything about Lowry, you know she was psyched to give birth to her third child. Now that the baby is finally here, Lowry is soaking up every second of motherhood.

On Wednesday, Lowry shared a sweet picture of her three boys. Lowry captioned the adorable photo, according to Instagram:

Lowry's heartfelt sentiment is a feeling a lot of parents can probably relate to. Although Lowry hasn't always had an easy life, she has remained grounded and 100 percent real at all times. No matter what you might think about Lowry, it's clear she's devoted to her boys.

More Like This
Yellowstone's Kelly Reilly Has A Much More "Content" Married Life Than Beth Dutton
Dr. Jill Biden Just Delivered Some Frank, But Powerful, Advice On Motherhood
25 Great TV Shows About School To Watch As A Family
'Virgin River' Fans Can't Stop Cracking Jokes About How Charmaine Is *Still* Pregnant