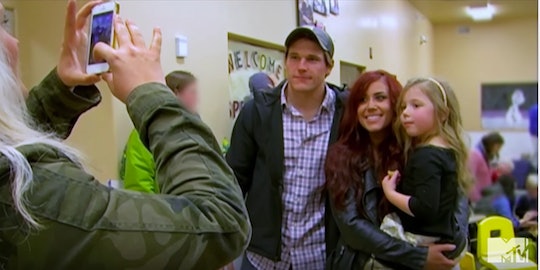 There's a new DeBoer in the world! News broke Wednesday morning that Teen Mom 2's Chelsea Houska and Cole DeBoer have welcomed their son, Watson Cole. Houska took to Instagram to announce the news, posting a black-and-white photo of her holding her son's small hand with the caption "Welcome to the world, sweet boy." DeBoer shared the same image on his Instagram account, captioned with a similar sentiment.

Houska and DeBoer didn't reveal their son's name when they initially shared the news of his birth on social media. But two hours later, the 16 and Pregnant alum and her husband both posted again on Instagram, this time with a close-up image of their adorable sleeping newborn. They both captioned their respective photos with their son's name: Watson Cole.

Back in July, Houska announced on Instagram that she was expecting her second child and the first for the couple. Houska was originally due to give birth on Valentine's Day, according to MTV News, but welcomed Baby DeBoer a few weeks early.

Watson Cole is little brother to Aubree, Houska's 7-year-old daughter who she had with ex-boyfriend Adam Lind. According to MTV News, Aubree and her step-father, Cole DeBoer, share a very special bond, which has been documented throughout Season 6 of Teen Mom 2.

Houska and DeBoer tied the knot in October in a small ceremony in front of family, US Magazine reported. The pair started dating in the summer of 2014, after meeting at a gas station, and became engaged a year later. Their relationship, as well as their journey to marriage, was chronicled on Teen Mom 2. According toUS Magazine, Housaka told MTV that:

Cole asked Aubree if it was okay if he married her mommy ... She immediately said yes, was extremely excited, and gave him a big hug.

Houska's dad, Randy, is also fond of Cole, according to US. The elder Houska, who goes by the Twitter handle @PapaRandlicious, tweeted when the engagement was announced that he was "totally ready to add another #soninlaw." As for the news of his new grandson, Papa Houska jokingly tweeted Wednesday, "Helluva snowstorm last night. Anything else go on while I was sleeping?"

For many people, parenthood is an exciting — albeit nerve-wracking —time. If their Instagrams are any indications, it seems that Houska and DeBoer are just overjoyed to start on their journey together. Congratulations to the happy family.