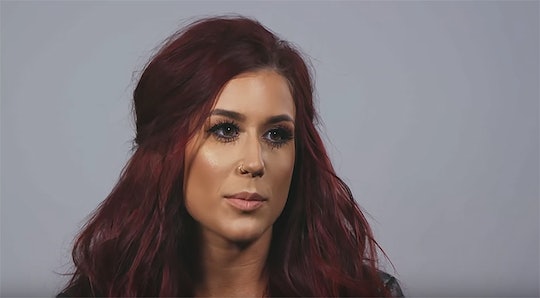 'Teen Mom 2's Chelsea Houska Had A Fan Show Up At Her Doorstep, & It's Totally Not OK

Teen Mom 2 star Chelsea Houska announced her third pregnancy in March 2017 via an *adorable* Instagram post. Fans were delighted by the news, to say the least, and it seemed like Houska was in a really good place. But just one month after the baby news broke, Chelsea Houska had a frightening fan experience. Although Houska is doing OK (phew), her story is an important reminder of why celebrity parents deserve privacy.

Houska and her husband, Cole DeBoer, are in a really tough predicament when it concerns their personal lives. Although DeBoer and Houska both want to protect their privacy, a little show called TM2 makes that pretty difficult — especially since their home in Sioux Falls, South Dakota, is often featured on the series. Balancing a career in the public eye and a need for privacy is a tough dance, to say the least.

Making matters even more difficult, however, is that some fans think it's OK to show up at Houska's house unannounced — something that has happened multiple times.

"I recently had a grown man come to my door, in the middle of the day when I was home alone with both kids, asking for a picture," Houska tweeted on Wednesday in response to a YouTuber's message about privacy concerns. "Keep as much private as you feel you need to girl. I do not blame you!"

Yikes. Talk about an unsettling situation.

When a fan pressed Houska for more information about the incident, she responded:

I was very uncomfortable and said I didn’t want to take a photo. Aubree was scared. I think he was harmless, but it’s just the fact that a man would do that. My husband came home from work early...it was just an all around uncomfortable situation.

Well, at least no one was hurt in this situation. It's a good thing Houska has a strong support system to keep her feeling safe during scary times like this one.

Following Houska's story, one person suggested that she buy a new house to maintain her anonymity. Although it might seem unreasonable to expect a person to move due to invasive fans (that's not exactly fair, right?), it turns out Houska has considered it. "If there was a house we liked for sale we would have already been moved haha hopefully soon," Houska tweeted. "For now we have upped our security system!"

Ugh. It's so sad that Houska has to uproot her life for this upsetting reason.

But one can't fault Houska for wanting to start over because this isn't the first time someone has invaded her privacy. "I love you guys and appreciate the support and love u have for my fam, but pleease don't come to our home," Houska penned in October 2017. "It makes us really uncomfortable." Houska then went on to mention that a fan showed up at her door while she was pregnant with her son, Watson. Girl can't catch a break, it seems.

Of course, there's nothing wrong with fan admiration or interest. Plus, many celebrities appreciate all the love and support. That being said, however, there are many people out there who take things too far. No one, famous or not, should feel like their privacy or safety is threatened — especially in their own home. Houska, like any parent, simply wants to keep her family safe, and it's sad that she can't do that right now.

Not only should people avoid visiting a celebrity parent's house, but fans also need to be mindful of what they post online. For instance, I found Houska's personal information via a fan account — a discovery that took less than a minute. It's important to keep in mind that sharing private info like that can possibly put a person's life in jeopardy.

To Houska's credit, she is handling this uncomfortable situation very well. The point is, however, Houska shouldn't have to deal with this — and one can only hope people will respect her privacy going forward.