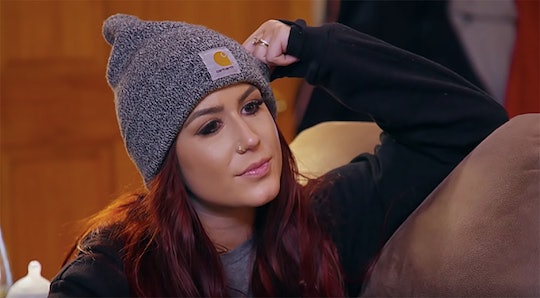 On the surface, Teen Mom 2 star Chelsea Houska seems like she has everything under control thanks to her supportive husband, Cole DeBoer, and the love she receives from her fabulous three kids. But most recently, Chelsea Houska opened up about suffering from postpartum anxiety and panic attacks. Although this admission was probably tough for her, the reality star's brave honesty is drawing awareness to a critical yet underrepresented issue many parents face.

After Houska split from Adam Lind, the father of her 9-year-old daughter, Aubree, her life transformed for the better. The mom found a a great groove as a single parent, solidifying to Houska that she didn't need to rely on a inadequate partner to raise her daughter. Things got even better for Houska when she met DeBoer sometime in 2014, her now husband and father of their two kids, 8-month-old Layne and 2-year-old Watson.

Despite these wins and overall happiness with life, Houska recently admitted that she has struggled with postpartum anxiety, a condition that can cause "constant worry, feeling that something bad is going to happen, racing thoughts, disturbances of sleep and appetite, inability to sit still, physical symptoms like dizziness, hot flashes, and nausea," according to Postpartum Support International.

Houska experienced some of these symptoms, noting on a recent episode of TM2 that she thought something was seriously off with her emotional state.

“A lot has happened in the last six months. We moved, I had a baby, we were robbed," she told her dad during dinner, according to Us Weekly. "I told you guys this was gonna mess me up, because I don’t handle this stuff well. I feel really anxious right now, so maybe that’s enough talking about it.”

She added, "I think it's really common and it's not something a lot of women talk about. I thought it was important to bring it up on the show."

If you think you're suffering from postpartum anxiety, ask yourself whether your symptoms are interfering with your life or are difficult for you to control. "For mothers, and for anyone struggling with anxiety, it has to do with the amount of anxiety, the intensity of it, and how distressed they are by it — that’s what defines a disorder versus normal anxious feelings," Psychiatrist Catherine Birndorf explained to GOOP. "It becomes a problem when it’s interfering with their life and causing them a great deal of distress."

Making an appointment with a doctor or trusted medical professional is the first step in dealing with this issue. Talking to other parents about the diagnosis and experiences can also be therapeutic, a sentiment one fan highlighted in a Twitter conversation with Houska.

"@ChelseaHouska talking about her anxiety and panic attacks," the commenter wrote. "I hope she knows she’s not alone and soo many people relate #TeenMom2."

"Makes me feel so much better to hear that!" Houska replied.

The more people talk about postpartum anxiety, the less stigmatized it will become. Props to Houska and her fans for joining in on the conversation.