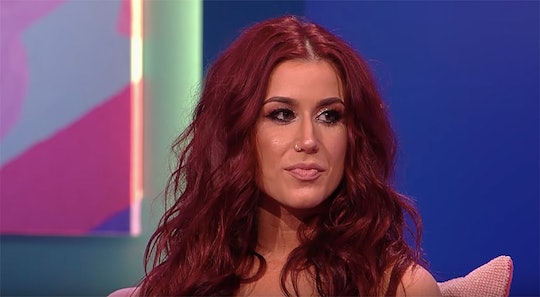 Teen Mom 2 Chelsea Houska's third pregnancy announcement in March was nothing short of thrilling. In addition to a sweet sonogram picture Houska shared to Instagram, she also penned a heartwarming message highlighting her excitement. And fans got to witness Houska and her husband, Cole DeBoer, find out their pregnancy news on Season 7 of TM2. Still, as much as Houska is amped to expand her family, it doesn't mean she's immune to third trimester woes. Case in point: Chelsea Houska is officially "over" her pregnancy, a sentiment she confirmed via a tweet on Sunday. And in a not-so-surprising twist, many moms out there can relate to her frustration.

It's no secret Houska always wanted to have a large family with DeBoer. “We have baby fever already,” Houska confessed in an episode of TM2, shortly after she gave birth to her 1-year-old son, Watson, according to People. “I just want so many baby Coles. I think it’d just be fun to have so many babies closer together.”

The good news is Houska got her wish, and she'll add a girl to the family in September. Fast forward a few months later and Houska is totally done with being pregnant. "Apparently my “over it” stage of pregnancy hits at 33 weeks 5 days because 😐😐😐😐😐😐 #notmuchlonger," Houska tweeted on Sunday.

It's really no surprise Houska is not feeling her pregnancy at this point. It's brutal to rock a bump in the summer heat, especially when high temperatures make you sick. Just ask Houska, who experienced summer nausea when she was pregnant with Watson. "It's not fun being pregnant in the middle of summer when the heat makes you sick," Houska tweeted in July 2016.

Unfortunately, Houska also struggled in the months leading up to 8-year-old Aubree's birth in September 2009, a fact she admitted in March when a fan asked about her pregnancy fashion. "So far it consists of leggings and hoodies cause it’s freezing here we’ll see how I keep myself together in the summer though!" Houska wrote. "I remember summer was miserable when I was pregnant with Aubree!"

Luckily, Houska has a lot of fans out there to commiserate with as she ticks off the final weeks of her pregnancy.

"I’m one day ahead of you and let me tell you... I’ve been done for a few weeks in this Texas heat..," a fan responded to Houska's message.

"Yup!! Mine was at 32 weeks," another person commented. "My hubby had the task of listening to me complain about him w uncomfortable I was until he came at 40w2d."

"I’m at about 32 weeks and I’ve hit that moment. It hurts to bend over and pick anything up," someone else said.

A commenter chimed in: "I’m 33 weeks and 5 days today and my over it stage of pregnancy hit at 25 weeks!! I want this child out as well !! #highanxiety."

"Yea I’m 36 weeks and I’m literally done. There’s no more room in there and he is killing me," a fan admitted.

Yep, there's no denying Houska's tweet is super relatable. Many parents out there knows what it feels like to endure uncomfortable third trimester symptoms during extreme weather conditions. It seems like just about every part of United States is experiencing a heat wave at the moment, unfortunately.

The upside here is Houska doesn't have too much longer to go before her little girl enters the world. I bet she won't think twice about the last trimester struggles she endured once her precious daughter arrives, and all will be well soon enough. Keep your head up, mama.