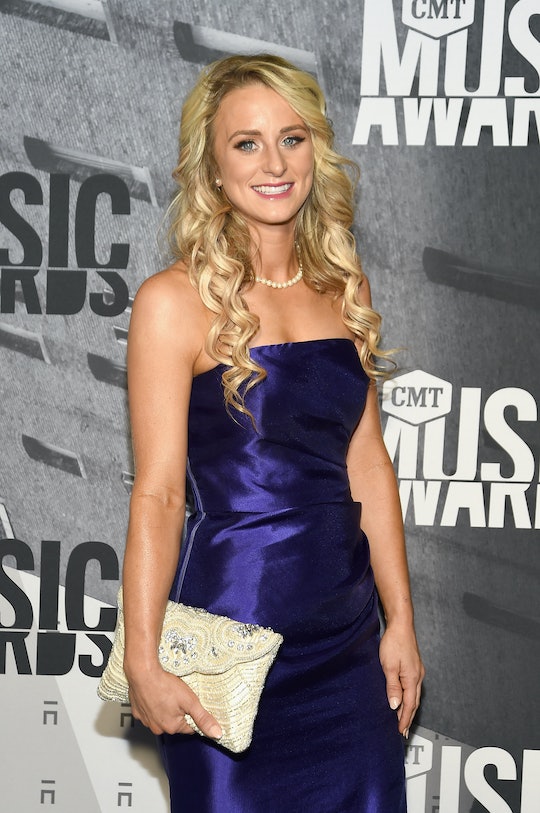 The young moms of MTV's 16 and Pregnant have all faced plenty of obstacles over the years as they adjusted to teen parenthood, but 25-year-old mom-of-three Leah Messer has definitely had some added challenges. For one, she was the first 16 and Pregnant mom to deliver twins, and then in 2014, she and ex-husband Corey Simms learned their daughter Ali had a rare form of muscular dystrophy. These days, Ali and her sister Aleeah are happy, active 8-year-olds, but in a recent tweet, Messer admitted there are certainly some heartbreaking moments: Teen Mom 2's Leah Messer tweeted about her daughter's disability, and it's a reminder that ableism is something many special needs parents have to battle on the regular.

Scroll through any of Messer's social media accounts, and it looks like her life as a mom of three girls is pretty picture-perfect. She regularly posts beautiful family selfies with her daughters, and is clearly also a proud cheer mom, often sharing photos from the twins' cheerleading competitions on Instagram. But on Wednesday, Messer tweeted about Ali's disability, according to People, and shared that, while there is an obvious physical impact, it also affects her daily life in lots of little ways others may not always realize. Messer wrote that Ali — who suffers from progressive vision loss, and who has worn glasses since she was a baby — recently asked her "[what it was] like to see with two eyes," and admitted that her daughter's comment "just broke [her] heart."

Even if you don't have a child with a disability, it's not at all uncommon to worry if there's anything about them that may be viewed by others as "different," especially once they reach school-age (kids can be mean, after all). But for moms like Messer, whose children have added health challenges, it can be especially difficult to not worry about the upsetting messages they might be indirectly receiving from the world around them. In a follow-up tweet, Messer wrote that she wishes every day that she could take her daughter's place (don't we all wish we could somehow keep our kids from ever getting hurt?), but emphasized that knowing her daughter's disability "has a greater purpose" ultimately helps to keep it all in perspective.

It definitely hasn't been an easy journey for Messer or Simms as the young co-parents have tried to find answers to their daughter's health problems over the years. And though finally getting Ali's diagnosis was a process in itself, the nature of the disease — it's progressive and incurable — has meant the diagnosis was only the beginning. In a 2014 episode of Teen Mom 2, according to E! News, Messer explained ,

The disorder affects her respiratory system and progresses the older she gets. The bigger she gets and the more weight she gains, the harder it'll be for her muscles to carry the weight.

One area in which Ali's disability has a big impact? Her school life. In September 2017, Messer shared that Ali’s teachers told her that her daughter had been falling regularly while walking at school, according to People, and Ali also admitted to her mom that she often had a hard time opening her lunch containers, and finishing her meal in the amount of time she was given.

Messer said it became pretty obvious that Ali "[needed] somebody with her, by her side, at all times," and she pushed to get her extra support at school, so that there would be someone who could help her eat lunch and help with her mobility.

Thankfully the school was on board with the accommodation, but as many parents know, having a child with a disability can often mean you have to become a pretty outspoken advocate to ensure their needs are met — and it's a frustrating reality of living in a world made for able-bodied people. After all, while Ali's specific disability might be rare, it's not rare that children go to school with lots of different ability levels, and it's not rare that there will be kids (especially in early grades) whose developmental or physical delays or challenges mean they will need extra support.

Even in the best case scenario though, when your child's school is totally willing to provide that support, the hard part is that it still often feels like an afterthought. The idea of having someone help Ali with her containers and giving her more time to eat, for example, only occurred after she'd gone hungry. The painful realization when you have a disability, or when you have a child with one? The world basically functions on the assumption that you're able-bodied, even though that obviously means that many people are going to have to struggle unnecessarily when they really shouldn't have to.

Given the significant impact Ali's disability has on her physical health — she will likely one day end up in a wheelchair, and her disease also affects her respiratory function, according to In Touch Weekly — it might seem like Ali's comment about wearing glasses should be the least of Messer's worries. But, as any parent will likely attest, it's the small moments like that that can hit you the hardest. Because while you might be able to push for things like extra school support, or other necessarily life accommodations, you have much less control over the way your child's disability can affect them in a million other tiny ways on a daily basis. And that really is heartbreaking.

One thing that seems clear though is that Messer is a huge advocate and support for her daughter, and that it's important to her that Ali is able to live an independent life, while ensuring that her very real needs and limitations are taken into account. But, as her tweet proves, even the fiercest warrior mom struggles when their child is upset. And it's a reality that deserves to be acknowledged far more often than it actually is.