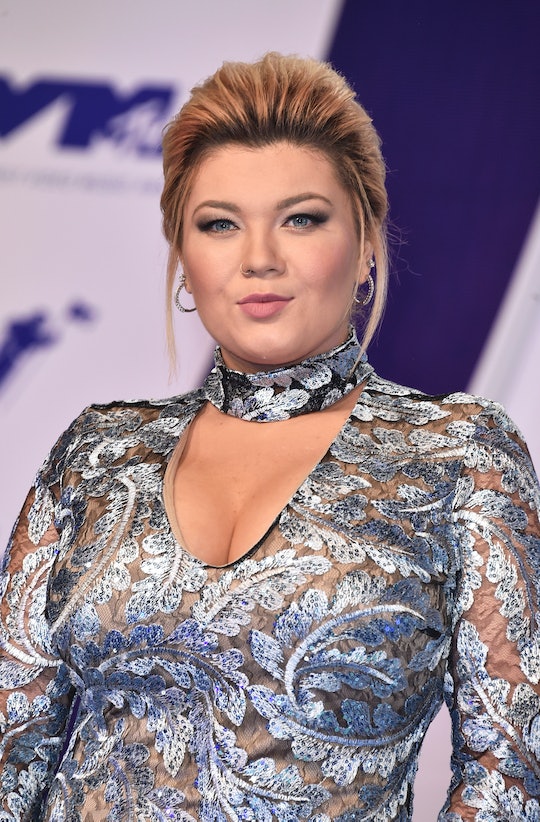 The original stars of 16 and Pregnant have grown up right before fans' eyes. Fans watched as the girls on the MTV reality show struggled to do their every day activities as a pregnant teenager and then be forced to grow up once their babies arrived. Now, on Teen Mom OG, fans are watching these women live their lives as adults in front of cameras, while still making hard decisions and celebrating milestones of their own. So, it should be super exciting to learn that Teen Mom OG star Amber Portwood is reportedly pregnant with her second child.

After watching Portwood give birth to her daughter, Leah, eight years ago, it's certainly exciting news. Us Weekly and People reported on Wednesday that Portwood is expecting a child with her new boyfriend, Andrew Glennon. "Amber has been feeling sick lately," a source told Us Weekly. "But she's really, really happy."

Portwood and Glennon have been dating for a few months, after meeting on the set of Marriage Boot Camp: Reality Stars (he worked behind the scenes on the show as a crew member, according to E! News) and according to the magazine, the couple could not be any happier together.

Portwood dished to Us Weekly in August all about her new relationship, telling the magazine:

We're going slow and just trying to be smart about everything which is good to find somebody on your level like that. I think we just kind of fell into this groove of really enjoying life with each other for a while, so it's kind of fun and kind of serious in a way as well, but we're trying to not put too much pressure on a relationship.

Their romance has been long distance since the start of it, according to Us Weekly. Portwood lives in Indiana with her daughter, while Glennon lives in Malibu, California. But, Portwood told Us Weekly that space and distance is healthy for their relationship (especially since she just got out of a long-term relationship earlier this summer). To top this all off, Glennon already has Portwood's daughter's approval. If Glennon did not sound like the perfect man for Portwood, then Leah's approval is icing on the cake.

Teen Mom OG returns back to TV on Nov. 27 on MTV (thank goodness) for yet another season and it is very likely that Portwood's reported pregnancy could be featured on the show. Portwood told Us Weekly that her relationship would be mentioned on Teen Mom OG but that Glennon was only filmed in front of the cameras once. This means that Portwood's storyline will more than likely talk about her new relationship and all of the super exciting things to come along with it (like the possibility of a new child on the way).

Portwood was absent from the filming of the Teen Mom OG reunion special, according to In Touch Weekly, which could be attributed to her new reported pregnancy. But Portwood has not yet confirmed the pregnancy or said anything about the rumors on her social media accounts.

In the past, Portwood expressed her fears about getting pregnant again. During last season of Teen Mom OG, Portwood was honest about her struggles with suffering from borderline personality disorder and bipolar disorder, according to In Touch Weekly. During an episode last season, Portwood revealed that she would not be able to get pregnant because of it.

But things do change and Portwood sounds like she is in an amazing place with her new boyfriend. This reported pregnancy news could not be anything but great news for of the original teen-now-adult moms.