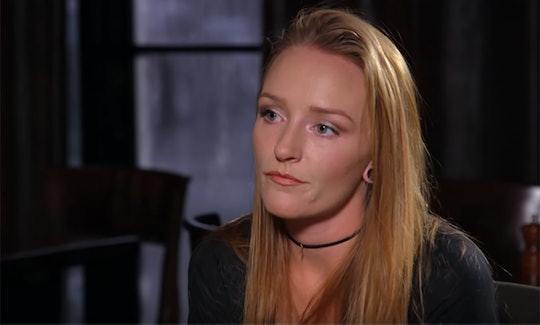 In January, fans learned that Teen Mom OG star Maci Bookout miscarried a baby girl. Although Bookout didn't elaborate on the loss at the time, fans got to hear more of her story on Monday night during an episode of TM OG. Sadly, viewers found out that Maci Bookout questioned her self-worth following her miscarriage, and that she initially tried to keep her pain bottled up inside. But as difficult as these details might be to hear, Bookout's brave admission is important for other parents going through a similar experience.

The plus of being on a reality show with other parents is that you have a built-in support system. Case in point: Shortly after TM OG star Catelynn Lowell entered a rehab facility in Arizona to treat her mental health concerns, Bookout flew out from Tennessee to pay her a visit. And while there, Bookout chatted to Lowell and her husband, Tyler Baltierra, about her heartbreaking miscarriage. As it turns out, Bookout couldn't have chosen better friends to talk to because Lowell and Baltierra also suffered a miscarriage in 2017.

After Lowell admitted that she just wants "to be able to have a baby and be OK,” according to Us Weekly, Bookout felt comfortable enough to share her struggle post-miscarriage.

"For me, I believe in God, and I'm like, 'Does he not think that I was, like, worthy of being this child's mom?' But you just have to accept the thoughts and it's part of grieving," Bookout, a mom of three, revealed, according to People. "The thing that helps me most, especially when I seem to get down in the funk of it all, is to just be thankful for the babies I do have."

Although it might be confusing to some people why Bookout felt a sense of worthlessness after her miscarriage, it's actually a really common feeling.

In fact, Martha Diamond, PhD., co-authored an entire book on this phenomenon titled, Reproductive Trauma: Psychotherapy with Infertility and Pregnancy Loss Clients. Diamond explained that parents who suffer a miscarriage often put a lot of time and energy into trying to figure out where they went wrong, despite the fact there's no one to blame in these situations.

Diamond said, according to the American Psychological Association:

They will spend enormous amounts of emotional energy trying to explain why it happened. They often blame themselves, even when it is inaccurate, to help make sense of it. Women may torment themselves with guilt and blame, rewriting the story, so to speak: ‘If I hadn't gone to the grocery store' or ‘If I didn't stay up so late.' It's a way of coping with the loss. I've come to see this as part of the grief process.

But as common as these feelings may be, there's a lack of public discourse on this painful issue, which is why it's so meaningful that Bookout is using her public platform to draw awareness to it.

The good news is Bookout's husband, Taylor McKinney, is providing her with a lot of support during this trying time.

“I didn’t tell Taylor for probably two months. I think I was just afraid — like, what he doesn’t know won’t hurt him,” Bookout said about opening up to McKinney, according to InTouch Weekly. “Then I realized I couldn’t deal with it by myself. And I know that he would want to be there for me.”

Of course, not every parent has a partner to see them through a tough moment like a miscarriage, and there are plenty of people out there who continue to experience feelings of guilt and shame in silence. And as much as it was probably difficult for Bookout to address her miscarriage publicly, there's a good chance her story will provide some comfort to those people who are going through this painful situation alone.