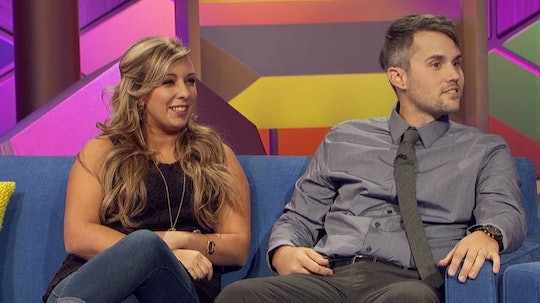 'Teen Mom OG' Stars Ryan & Mackenzie Edwards Have A Baby On The Way!

There's a lot to keep up with on Teen Mom OG and the most recent episode was no different. Fans who stuck around until the end credits were treated to a sneak peek of next week's episode. The preview revealed that Ryan Edwards and wife Mackenzie are expecting their first child together. Fans have been speculating for some time that the couple had a little one on the way, and it looks like they were right.

The telling scene shows Mackenzie presenting a positive pregnancy test to the show's producer, Jeni. While fans will have to wait a little longer to find out the details, Mackenzie and Ryan have dropped hints along the way that a baby was on their minds. E! News reported that Ryan told Mackenzie in a recent episode that he had babies on the brain. "I'm ready when you're ready," he said. "I think now is as good a time as ever."

The big baby news comes about four months after the Edwards tied the knot for a second time in what they described as their "original, intended" wedding ceremony. Their first wedding was a secret elopement ceremony in May of 2017, before Ryan headed to rehab, according to People. But their official ceremony in November was the plan from the beginning. “It’s been in the works since the day we got engaged,” Mackenzie told E! News. “It was never just decided upon — we knew from day one this was going to be it.” The two plan to celebrate this date as their anniversary, rather than the date of their elopement.

Both Mackenzie and Ryan have children from previous relationships — Mackenzie has a son, Hudson, with her ex Zachary Stephens and Ryan has 9-year-old Bentley with Teen Mom's Maci Bookout — and they looked at their marriage as the blending of two families. Mackenzie told E! News as much in an interview following their official ceremony:

Everything is just kind of at a resting place right now. It’s about our boys. This is a day about us, yes, but it’s also about us becoming a family.

That little family is growing even more with the coming baby. A source close to the couple reportedly told the popular site The Ashley's Reality Roundup that the pregnancy was news to everyone. “That’s when most of the cast and even some of the crew found out Mackenzie was pregnant,” the source said.

But the Edwards have reportedly known about the pregnancy for some time:

Ryan is actually really excited about this baby. They were trying to keep it quiet in the beginning, though, because they knew that [viewers] would have a lot of negative things to say.

He or she added that the two "don’t know the sex of the baby yet, but are finding out on April 20.”

Mackenzie isn't the only Teen Mom OG star with a baby on the way. Amber Portwood is expecting her second child this year, People reported. The new baby is her first with her cinematographer boyfriend Andrew Glennon. Portwood announced the child's sex in December in an Instagram post. The post's caption read, “Little baby Glennon is on his way,” and included a photo of a Christmas ornament with “It’s A Boy!” written on it. She is already a mother to 8-year-old Leah, her daughter with ex Gary Shirley.

It looks like the coming seasons of Teen Mom OG will be full of new babies for fans to gush over, and I am totally okay with that. Between Mackenzie and Ryan's little one, and Portwood's son, the show is gaining a few new cast members.