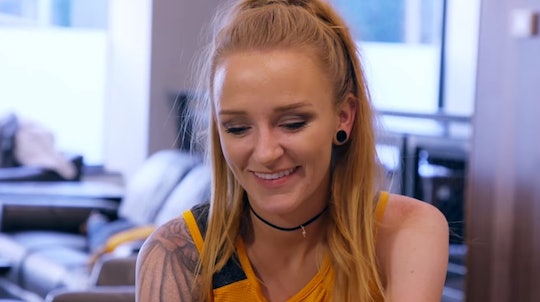 MTV's Teen Mom OG continues to show the ups and downs of parenthood, along with some of life's harsh realities. Recently, Maci Bookout revealed she suffered a devastating miscarriage and part of her story will be featured on an upcoming episode of the show. Suffering a miscarriage is completely heartbreaking, and for this mother of three to be brave enough to talk about her own experience on national television is truly admirable.

In a sneak peek at next week's Teen Mom OG episode, according to OK! Magazine, Bookout and her husband Taylor McKinney are shown having a discussion about adding more children to their family while they are out to dinner. "We are not having another baby," Bookout tells McKinney at dinner, according to People. “You really want another child?” McKinney replies, “I love kids. I wouldn’t be mad about it.”

When McKinney tells Bookout it would be easy for them to get pregnant again, Bookout quickly interrupts McKinney and says, "You're forgetting something ... Think about it." After a few moments of silence, McKinney becomes visibly upset and excuses himself to go to the restroom. One of the show's producers then asks Bookout what happened. At this moment, Bookout confesses, "I had a miscarriage ... Her name is Dandy. Dandelion." According to Us Weekly, she lost her baby girl sometime in 2017.

After McKinney returns, he says that he doesn't want to talk about the miscarriage, but Bookout gently responds by saying, "I think it's important for people that are watching, that we talk about it."

Bookout's bravery to speak out about her miscarriage could relate to many women (and their families) who have gone through similar tragic experiences and, as she explained, that's why she wants to shares this with her fans. However, McKinney does not appear to agree and maintains that he does not want to discuss their personal tragedy just yet. Indeed, everyone copes with loss differently and there's no right way to grieve a miscarriage.

When Bookout revealed her miscarriage on Teen Mom OG, the conversation actually started out because the couple was talking about adoption and having more kids, which they've discussed before. This past April 2017, for instance, Bookout spoke with People about her adoption plans for the future with McKinney. At the time, Bookout said they would no longer be having kids biologically. According to People, she explained:

We’ve both have talked about adoption or fostering in the future, down the road, but we’re not [having kids] biologically. For both of us, it’s one of those things where if we are capable of providing a stable home, healthy relationships and some hope for a child who may not have that or ever experienced it, then we want to ... Plus, I think introducing our children to something like that and giving them that experience and for other child to be able to have a sibling or healthy relationships with other children … all kids deserve that.

After she recently revealed she suffered a miscarriage, Bookout also expressed on Teen Mom OG that she still wishes to adopt a child one day, rather than become pregnant again, as reported by People. (She also said that she and McKinney have agreed to adopt a child, but not a baby.) Their goal is to take in a child who is 4 to 6 years old, according to Us Weekly, but, McKinney still hopes they will have another biological child together. At the end of the clip, Bookout and McKinney come to a compromise and decide that they'll try to get pregnant again and will adopt a child at some point in the future.

Though she was understandably hesitant, Bookout's decision to try to get pregnant again, in light of her husband's desire for her to biologically have another baby, is brave. It takes a lot of courage to try again after emotionally, mentally, and physically dealing with the heartbreaking loss of a miscarriage.

More Like This
Khloé Kardashian Reveals Tristan Thompson Proposed To Her Last Year & Why She Said No
Prince Louis Is Asking His Parents Questions As He Tries To Understand Queen Elizabeth’s Death
Kim Kardashian Stars In Hilarious House Of The Dragon Parody, The Targashians
Lifelong Teacher Dr. Jill Biden Loves Watching Abbott Elementary Too