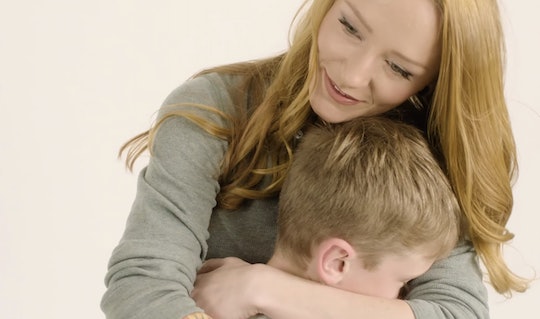 ‘Teen Mom’ Shares A Video Of The Moms Years Later

Filed under "news to make you feel old today," MTV posted an amazing video from the cast of Teen Mom OG on Tuesday, reminding viewers that, "The kids are almost halfway to 16 years old!" Teen Mom's emotional video of the moms sharing messages to their kids is not only a sweet look at just how big their kids have grown, but just how much the moms themselves have grown, too.

Titled "Growing Up Together," Maci McKinney, Farrah Abraham, Amber Portwood, and Catelynn Baltierra shared candid messages to their kids about just how much they've had an impact on each of their lives since becoming moms eight years ago, when each first appeared on 16 and Pregnant. The video opens with Abraham in voiceover describing how she felt the first time she held her daughter Sophia after she was born, with footage from that momentous episode eight years ago:

I'm overwhelmed, and how happy I am, and how proud that I made it through labor, and I have a happy, healthy baby. You're just amazing.

Portwood recalled the moment her daughter Leah first looked into her mother's eyes — just moments after she was born — as a moment she would never forget. Bring out the tissues, because the Teen Mom OG video message to their kids gets even more emotional.

"Bentley, your first day of kindergarten killed me," McKinney said with a nostalgic chuckle. "You were my baby... and then you weren't my baby anymore," she recalled fondly. Bentley has since become a big brother two times over, as McKinney gave birth to her third child in May 2016. Meanwhile, Baltierra said she felt like "being a mom just totally changes you for the better."

Abraham became quite emotional while expressing her gratitude for her daughter. Sophia's father, Derek Underwood, died in late 2008 in a car accident. On being a mom, Abraham tells her daughter, "It makes my heart proud and it makes me happy living every day."

Portwood also got emotional talking about how motherhood has changed her. "You make me a better person," she said, before breaking down into tears. "I put myself in a harsh situation because I wasn't there for you, and I'll explain that to you later." Portwood spent 17 months in jail on drug possession charges in 2012 and 2013, when her daughter was just 3 years old. In her video message to her daughter, she vows she won't let Leah "mess up like I did. I will make sure of that."

Meanwhile, Baltierra joked to her daughter Nova, born in 2015, that she doesn't want her to make her a grandmother anytime soon, while excitedly looking forward to watching her daughter grow up to be a woman. Watch the full video below.

These are some pretty inspiring words given that each mom was just 16 years old when they became moms, and it's really moving to see just how much each woman has grown. My oh my, how time flies. The new season of Teen Mom OG premiers Monday on MTV.