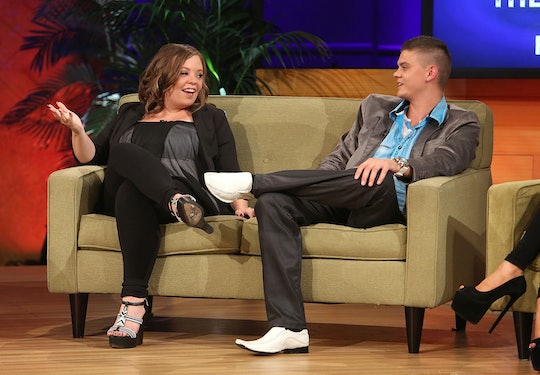 Having the support of a loved one can make all the difference in the world. Whether you're going through a problem at work, a mental health crisis, or anything in between, having someone be there for you can make it all so much better. And Teen Mom OG star Tyler Baltierra's message to his wife, Catelynn, as she enters treatment for depression proves just that, as well as the fact that the couple are totally in this together.

On Friday, Catelynn took to Twitter to let her fans know what she was going through, writing: "Well today I thought of every way to kill myself.. so I'm going to treatment." She added the hashtag, "#MakeChesterProud," a nod to the late Chester Bennington of the band Linkin Park, who took his own life in July.

After Catelynn posted her original tweet, she also shared a photo of the tattoo on her arm, which reads, "My story isn't over yet," a hopeful update that the 25-year-old was going to try and get better. And now, Catelynn's husband has shared an update via Instagram, assuring fans that his wife was, in fact, in a treatment center and that he was there to support her through it all.

"We just dropped her off. We haven’t held each other & just cried like that for a long time. Even after 12 years, I continue to be AMAZED by her strength, vulnerability, & courage to get help," Tyler wrote on Saturday, alongside a photo of him and Catelynn smiling and in love.

Tyler then went on to quote his wedding vows to Catelynn, "As long as I am alive, you will never be alone," and describing it as his "call to arms," saying that he "will fight this war with her right by her side, we will not surrender to this." Tyler is very obviously dedicated to Catelynn's well-being, ending his post with a passionate declaration, "I will go to battle EVERY TIME for her!"

This isn't the first time Catelynn has been open and candid with her mental health. Back in 2016, she entered a facility to help with postpartum depression, telling MTV News, "I'm seeking help for myself and my family. Thank you to all of my supporters. My family and I would appreciate some privacy at this time." And now, Catelynn has realized that she needs to take some time for herself and seek out help again, and that's very admirable.

Unfortunately, we live in a time when far too many women silently struggle with mental health issues. In fact, according to Psychology Today, "Research suggests that women are about 40% more likely than men to develop depression." And when childbirth occurs, "As many as 41% of women suffer from some form of postpartum depression," the publication reported.

Although not every woman is as able (both financially as well as having a support system) as Catelynn has been to receive professional help for postpartum depression, her willingness to speak out about it and get help sends an incredibly important message. Not only to her fans and followers, but certainly to her daughter, 2-year-old Novalee Reign, as well as her entire family.

It's both admirable and inspiring that Catelynn has made the decision to seek treatment to help her cope with the suicidal thoughts she'd been struggling with, because taking care of one's mental health is so important. And her husband might have just said it best when he tweeted on Friday:

Incredibly proud of my wife...when she thought she had no choices left, she reached out & decided to LIVE today! My life would be desolate without her in it. You are beautiful, strong, worthy, & loved.

Struggling with depression can often be a long and lonely journey, but Tyler's words and actions make it clear that Catelynn has an incredible support system fighting this with her.