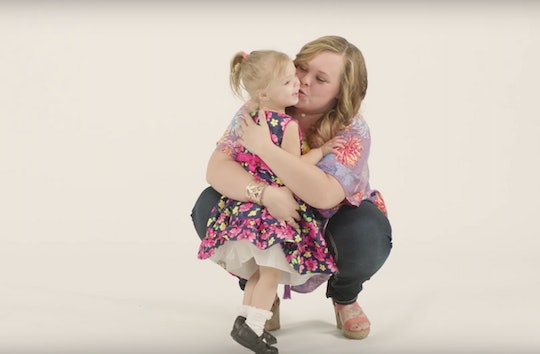 After nearly two years, Teen Mom's Catelynn Baltierra reunited with her daughter Carly on Saturday. Baltierra originally appeared on MTV's 16 and Pregnant in 2009, in which she appeared with her then-boyfriend Tyler. They made the incredibly difficult decision to place their daughter Carly, who was born in May 2009, for adoption. In January 2015, Baltierra gave birth to a second daughter, Novalee Reign and married Tyler eight months later.

The two were especially excited about getting to see Carly, especially since it has been two years since they've seen her. They posted their exciting news all over social media Saturday. Catelynn shared on Twitter: "Today was awesome.. seeing my two Little's play and have fun all I know is she is beautiful, smart, sassy, and TALL!!" Tyler was equally as excited to reunite with their daughter, tweeting, "Carly ran right to me with a huge smile on her face when I was holding Nova, it was pretty precious."

While the Baltierras have an open adoption relationship with Carly's adoptive parents, it has been fraught in recent years. Catelynn and Tyler have risen to a level of reality TV stardom that no one could have foreseen when Carly was born eight years ago, and it has thus impacted their relationship with Carly's adoptive parents.

As Dawn, the Baltierra's adoption counselor notes in the clip above, they signed away their rights to "ongoing face-to-face visits," which means that their requests to see Carly are just that — requests. Their daughter's adoptive parents have the final say as to whether or not they grant that request. The Baltierra's second child, Novalee, first met Carly at their wedding in 2015. In April, Tyler posted a photo on Instagram of their daughters' first meeting, which was not featured on Teen Mom OG.

Catelynn and Tyler have had an intense journey as birth parents to Carly, inclusive of everything from how they're raising their daughter Novalee, to how they're navigating the complexities of open adoption. Their recent visit with Carly shows that as complex as their relationship may be, they hope to remain a part of Carly's life as much her adoptive parents will allow.