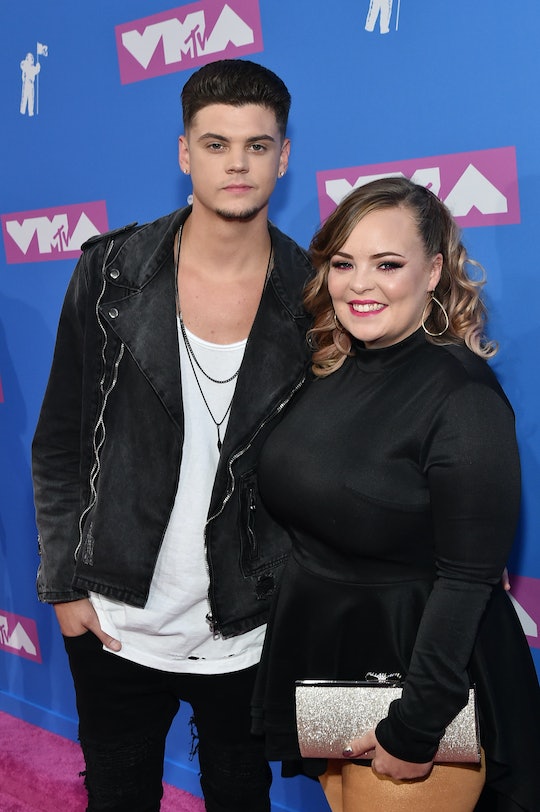 It's been 10 years since the world was first introduced to high school sweethearts Catelynn Lowell and Tyler Baltierra on MTV's 16 and Pregnant, when they made the difficult and mature decision to place their daughter, Carly, for adoption. A lot has happened for the couple, who now star on Teen Mom OG, since then, including a marriage and the addition of two more children, daughters Novalee and Vaeda. But the difficult feelings over placing Carly in an adoption program still remain. Most recently, Catelynn Lowell shared that being a birth mom is still hard for her 10 years later for a reason that most parents can sympathize with.

In a recent tweet, as Us Weekly reported on Tuesday, Lowell admitted that it's been a rough journey, with one of the hardest parts of the adoption process, to this day, as not being able to get all of her biological children together for family events and having to explain why that's the case to her 4-year-old daughter, Novalee, who also goes by Nova.

"That’s another hard part of being birth parents...," she wrote on Twitter on Monday, Aug. 5. "Explaining to [your] children why we can’t be with the other child on birthdays etc. but as our kids get older the more they will understand and the more we can explain."

Many fans took to Twitter to share how heartwarming it was to see Nova say that she wanted to share her birthday cake and toys with Carly. "Omg Nova talking about Carli," one fan tweeted. "MY HEART EXPLODED!" One fan also acknowledged that Lowell and Baltierra are handling their complicated situation "beautifully."

Lowell also shared with her followers, though they could certainly tell from the most recent episode of Teen Mom OG, that "Novalee ADORES Carly."

During the episode, as Inquisitr reported, Lowell shared that they will share more with Nova and Vaeda about the adoption process when they get older, which certainly makes sense. Having conversations about tough and complicated topics with young kids is never easy, so saving these these important and complex conversations for when they're more mature and can better understand the situation may be the best route to take, if it's possible.

Baltierra has echoed Lowell's thoughts, sharing that while adoption was the best choice for them to make when they were teens, it was not easy. In fact, as he said in a recent Instagram post, placing Carly for adoption was "one of the hardest decisions of our lives."

Back in May, Baltierra shared on Instagram that 10 years ago he and Lowell made their adoption decision because they wanted to be able to "give [Carly] everything your innocent life deserved that we just couldn’t provide at the time," adding the hashtag #BirthparentStrong.

While it's been a full decade since the couple made the decision to place Carly for adoption, it certainly doesn't make it any less difficult. Lowell posted similar sentiments on Carly's ninth birthday. "I cannot believe that 9 years ago Tyler and I were waiting to go to the hospital to make one of the hardest decisions of our lives..," she wrote in 2018. "But it ended up being one of the BEST things we could of done for her... Carly we love you so much and are so proud of you!"

Lowell and Baltierra's openness and honesty about their experiences with adoption have long been appreciated by fans of Teen Mom OG, and they'll hopefully continue to bring awareness about the complex realities of adoption as the years go on and their sweet daughters get older.

More Like This
Prince Harry & Meghan Markle Could Take Us Inside Their Home For A New Docuseries
Jennifer Lawrence Just Kinda, Sorta Revealed The Sex Of Her First Baby
13 Celebrity Parents Who Also Raise Chickens At Home
Ashley Graham Reveals She Lost “Liters Of Blood” After Twins’ Home Birth