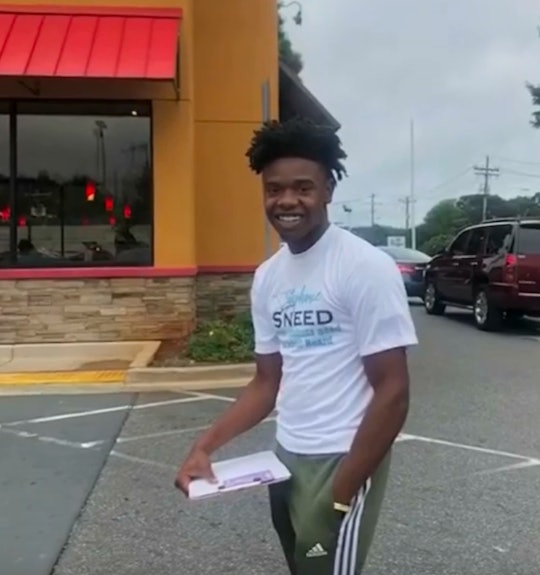 While many kids may be focused on conquering the latest video game craze or catching up on the latest viral YouTube video, there are a special few out there who have their sights set on something else, something pretty powerful. Like this teen who registered people to vote while they waited in line for Popeyes' now viral chicken sandwich. And, honestly, the world needs more of this right now.

Last week, Popeyes debuted its first ever chicken sandwich going head to head with other chains (Chick-fil-A and Wendy's) that offer similar sandwiches, according to Eater. It was so popular, in fact, that #chickenwars was trending on Twitter, some stores had sandwich shortages or sold out completely, and long lines formed just so people could get a taste of the now viral food offering.

And one innovative teen — 17-year-old David Ledbetter from Charlotte, North Carolina — took this moment in history as an opportunity to register people to vote as they waited in line, according to CBS News. Over the weekend, Ledbetter brought a small group of volunteers with him, and urged people to get involved with their local politics. And while he isn't old enough to vote himself just yet, he saw a lack of interest and participation from young people in his community and wanted to do something about it.

"I decided to register people to vote after I saw there was a lack of young people politically involved," Ledbetter told WCNC. "I believe that it is our duty to vote as American citizens, and it would be wrong not to exercise our political voice."

While at Popeyes, Ledbetter handed out sample ballots and voter registration forms to people as they waited and he managed to get 16 people to register. Amazing. Using social media to his advantage, Ledbetter posted the following on his Instagram page and word started to spread: "Today we were registering individuals to vote while they were waiting in line to try the @popeyeslouisianakitchen chicken sandwich. Make sure you’re registered to vote!@sneed4schoolboard."

Ledbetter was out in support of Stephanie Sneed, an attorney running for School Board in his district. And with the help of Sneed, word spread and news crews started showing up, garnering tons of praise. "Because he’s young, he has a new perspective on candidates engaging with young people. He’s already engaged and it’s in his makeup," Sneed said, according to The New York Post.

People on Instagram were just as impressed. "Outstanding young Bro we need young folks engaged," one user said on Ledbetter's post, and yes, the world absolutely does need more people like him. Another commented, "You’ve done a great thing young man. Very proud of you!"

As for why he did it, Ledbetter told WCNC that he "[likes] engaging with the community" and he has "aspirations with helping people and making society a better as a whole."

Children are absolutely our future, and it's teens like Ledbetter who give the world some hope. And, hey, if you're not sure if you're registered to vote, take Ledbetter's lead and visit Vote.gov to learn how.