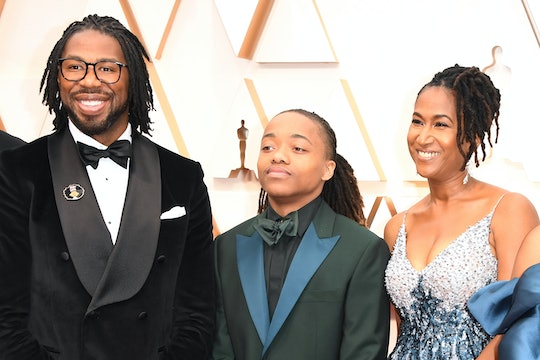 Barred From His Graduation Ceremony, Teen With Dreadlocks Attends The Oscars Instead

The Academy Awards gained an extra-special guest on Sunday when DeAndrea Arnold, the teen suspended from school for his dreadlocks, attended the Oscars with the Hair Love team. The animated short film explores the beauty of black hair, making Arnold's attendance with them all the more meaningful.

Arnold is a high-school senior from Texas who was told that he would need to cut his dreadlocks off in order to fit his school's dress code, or he would be excluded from his graduation ceremony. When he stuck to his guns, celebrities spoke out in support of his self-expression.

A powerful example of that support came when Oscar-nominated director of Hair Love, Matthew A. Cherry, invited Arnold and his mother Sandy to attend the Oscars with him. Speaking with CNN about the invitation, Cherry said that he couldn't wait to meet Arnold ahead of the awards show.

"It's truly an honor to have the platform to be able to invite Deandre and his family as our guest to the Oscars next Sunday," he said. "Deandre is such a good kid, and he shouldn't be punished for his hair. And we love that he didn't bend to the pressure to cut it."

"We think his hair is beautiful and this is the least we could do to support him and show him love," Cherry added. "Looking forward to meeting him."

Cherry's short film Hair Love explores the relationship between an African-American father and his daughter as they work towards styling her hair without mom. One goal behind the movie, Cherry told Variety, was "to tackle the negative societal stereotypes around natural hair," something that Arnold is also working to do by raising awareness of the CROWN Act, a bill which would prohibit hair discrimination against people of color in schools and workplaces. The trio made a powerful statement together on the red carpet.