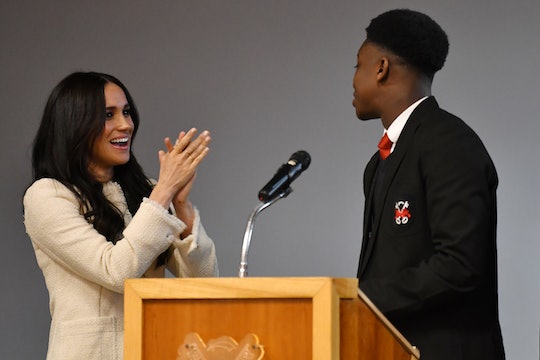 This year's International Women's Day was extra special for a certain Duchess of Sussex super fan. Meghan Markle attended an event at an East London high school in celebration of the day and got quite the warm welcome from another speaker. Now, the teen who hugged Markle on stage and called her "beautiful" has apologized to Prince Harry.

Markle was making her final round of royal engagements and visited Robert Clack Upper School in the town of Dagenham on Friday for a women's rights assembly. After taking the stage herself, she asked a certain "brave young man" to join her and speak about what International Women’s Day means to him. Before sharing his thoughts on the day, high school student Aker Okoye commented on how "beautiful" Markle was. The audience cheered and Markle wagged her finger at him in mock chastisement. Markle and Okoye later shared a hug on stage, an embrace that he is now apologizing to Prince Harry for just in case it didn't go over so well with Markle's husband.

Okoye penned a handwritten letter to Prince Harry and Markle, which was published in The Sun, wherein he explained that if he crossed a line with the hug it was only because he was so excited to meet Markle. The couple has yet to publicly respond to Okoye's note, but the Sussex Royal Instagram page did share a video of his speech and hug with Markle. "The Duchess asked a young student to come on stage and share his perspective on the importance of the day, and whilst much attention has been focused on his initial comment, what he shared beyond that was compelling and true,” the post's caption reads.

"Harry, I hope you don’t mind me writing this letter. I hope you don’t mind me cuddling your wife," Okoye wrote. "I was just overwhelmed and shocked to see her arrive at my school. It was a pleasure to hear her speech and to speak in front of her as well. She is truly inspirational." He went on to say that he hopes to meet Harry some day as well before wishing the couple "good luck with the future,” and ending “with kind regards.”

Okoye's speech was even more compelling than his letter. "For me, it is a reminder that it’s not only me that’s a part of my life. It’s not just me that’s part of the team of my own success," he said. "It reminds me that there are countless of people in my life — lots of strong women — that uplift me as a man. International Women’s Day is a reminder for all men and women that women can do it all and do it all."

But to further clear up any possible confusion, Okoye spoke with Entertainment Tonight about why he felt compelled to write a letter. "It was probably to clear everything up," Okoye said. "If that was my wife and I had this random child [hug her] … I don't think he's threatened by it [but] I thought it was polite to do so. It was out of my own kindness. If Meghan Markle wasn't as big as she is, I would still say sorry for that. I just thought it was genuinely polite to do so. It didn't feel as if I was forced into it.”

His apology is as sweet as his urge to hug Markle, but fortunately the video shows that she hugged him right back. In that moment, Okoye was feeling what I'd imagine just about anyone would feel when about to hug the likes of Meghan Markle: "amazed." "I almost had to congratulate myself in my head," he told Entertainment Tonight. "I thought, 'Well done, you must have done something.' The response [to my speech was] amazing and I was very, very proud of myself in that sense. Not arrogant — more bewildered because in the morning, I had no idea she was coming!"

As Markle prepares to start her more independent and private life with Prince Harry across the pond, Okoye and the rest of his classmates gave her quite the royal sendoff.