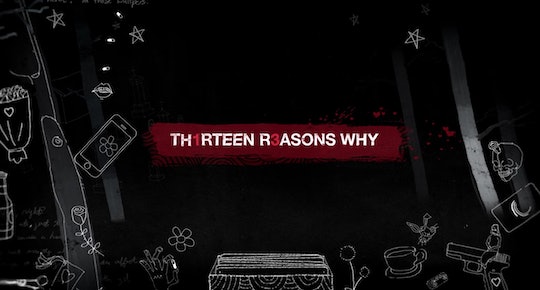 by Christina Montoya Fiedler
May 1, 2019

Today's youth can be constantly bombarded with messages of sex, drugs, violence, and self-harm through a variety of digital sources. Unfortunately it's nothing new in today's world. Basically, bad things are coming at them from all angles and parents are the last line of defense in regards to their safety. But things aren't always that easy. And one TV show's potential affect is now getting some attention from researchers. Teenage suicide rates increased in the months after 13 Reasons Why was released, according to a new study.

The study's results were alarming — there were 195 more youth suicide deaths than expected based on prior trends in the nine months following the release of 13 Reasons Why, according to NPR.

And it seemed to affect one age group in particular, the show's main audience. The month after the show’s premiere had the highest rate of suicide among 10 to 17 year olds during the past five years, according to the study, which was published this week in The Journal of the American Academy of Child and Adolescent Psychology.

The increase affected boys more, even though the main character of the show (who died by suicide) is a girl. It did not, however, have an affect on suicide numbers for those 18 years old and older.

"We've just seen this study and are looking into the research, which conflicts with last week’s study from the University of Pennsylvania. This is a critically important topic and we have worked hard to ensure that we handle this sensitive issue responsibly," a Netflix spokesperson tells Romper by email.

While researchers found a potential correlation between the show and suicide death increases, they cautioned that there could be another reason for the spike, although it is not known at this time, according to NPR.

"The graphic portrayal of the main character’s death and the way she is memorialized in the show is sending the wrong message," Jeff Bridges, PhD, the director of the Center for Suicide Prevention and Research at Nationwide Children’s Hospital said in a statement. "This study should serve as a wake-up call to those creating media that goes against guidelines for how suicide should be depicted."

Netflix's 13 Reasons Why is based of the best-selling book by Jay Asher. It follows the life of a teen, Clay Jensen, as he deals with the aftermath of his classmate Hannah's suicide, according to Super Summary. She leaves him a box of cassette tapes documenting the 13 reasons why she decided to take her own life.

In the months following the release of the show, Netflix increased its parental advisory, graphic warnings, and created a resource-related site after concerns poured in from experts and concerned families alike, according to CNN. More information from Netflix can be found here.

Common Sense Media, a watchdog site for parents looking to protect their kids in the digital age, cautions parents to think before letting their kids watch this show. With themes of self-harm, suicide, sexual violence, and drug use, it makes sense that this show would evoke strong feelings in both parents and teens.

Parents, Please, please, please watch this before you let your kids even think about watching it. There are messages in this show that need to be heard, but there is nothing redeeming in how it is presented here. I knew my daughter would ask to watch it, so I sat down for the first 4 episodes. That was enough. She did ask, because, 'all the kids at school are watching it.' No, she will not see it. Once something is seen/heard, it can't be taken back. This one is best left alone.

Suicide prevention is paramount, as is education surrounding the triggers and causes. Teens are still figuring things out, and while shows like 13 Reasons Why might be beneficial for some, it could have dire consequences for others. Parents, proceed with caution.